The Duke of Cambridge smiles as he is surrounded by his three children in new pictures marking both his birthday and Father's Day.

William turns 38 on Sunday, and was pictured at his Anmer Hall mansion on the Sandringham estate in Norfolk, where he has been staying with the Duchess of Cambridge, and their children Prince George, Princess Charlotte and Prince Louis.

13 PHOTOS
The Duke of Cambridge with his children
See Gallery

In one image taken by Kate, William and his three youngsters sit on a tree-swing posing for the camera, and in another the light-haired brood clamber on top of their father as he lies grinning on the ground.

William, who is second in line to the throne, is just one of a number of royals who have celebrated birthdays during lockdown.

The Queen turned 94 and also marked her official birthday, the Duke of Edinburgh turned 99 earlier this month, while Louis turned two in April and Charlotte reached age five in May.

The royals have stayed apart during the pandemic, and are scattered around the country at their various homes.

William, a future king, has kept himself busy during the crisis with royal video calls, and in the past week, stepping out for the re-starting of physical royal engagements – albeit with social distancing as a key element.

The duke is the most senior royal in line to the throne who is not considered most at risk of coronavirus because of his age. 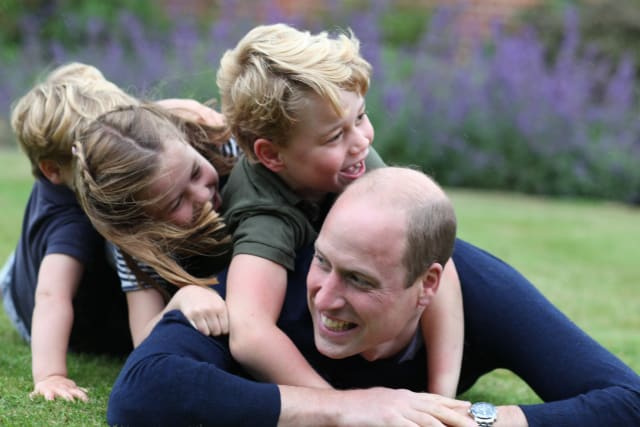 The monarch is in the high-risk category, and the Prince of Wales is 71, although Charles has already caught and recovered from the Covid-19 illness.

The duke is also apart from his brother the Duke of Sussex, who is living in Los Angeles after quitting the monarchy for a freer life and the ability to earn his own money.

Prince William Arthur Philip Louis of Wales was born second in line to the throne at St Mary's Hospital, Paddington, at 9.03pm on June 21 1982.

He weighed 7lb 1 1/2oz and was the first born son of heir to the throne Charles and the Princess of Wales.

At just nine months old, he accompanied his parents on their six-week official visit to Australia and New Zealand, a move which was a break from royal tradition.

He was just 15 and Harry 12, and the brothers walked behind the princess's coffin during a funeral procession through London.

William met Kate Middleton at St Andrews University in Fife, Scotland, and the pair wed in 2011 after dating for more than eight years.

He was made the Duke of Cambridge by his grandmother the Queen on the morning of his wedding.

The couple welcomed their first child George – also a future king – in 2013, followed by Charlotte in 2015 and Louis in 2018, and the family has been pictured together during the coronavirus crisis, joining in with the clap for carers.

William has opened up about his life in lockdown, in a variety of calls with charities, saying the success of his family meals depend very much on "what's on the table".

At his first face-to-face meeting with the public in months when he met ambulance crews in Norfolk on Tuesday, he confessed he was looking forward to being able to go to the local pub for a pint when it was allowed.

He also joked: "I'm worried about the waistline of the nation as well, with all the chocolate and cakes.

"I've done a lot of baking at home. Chocolate goes down very well."

Kate has revealed they have had "ups and downs, probably like lots of families" and she found keeping to a strict regime had helped, but home schooling had been challenging.

In recent years, the duke has focused his work on mental health, particularly trying to break the stigma surrounding men's mental health and harnessing the power of football to do so.