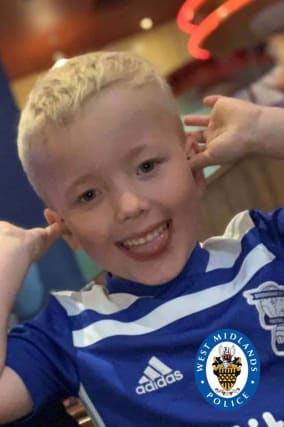 A father and his partner have been charged over the death of his six-year-old boy, police said.

Arthur Labinjo-Hughes died in hospital several hours after he was found unresponsive at a house on Cranmore Road in Solihull on Tuesday afternoon, West Midlands Police (WMP) said.

A post-mortem carried out on Friday gave his cause of death as a head injury, the force added.

The boy’s 27-year-old father Thomas Hughes and his partner, Emma Tustin, 31 – both of Cranmore Road in the town of Shirley, have been charged with causing or allowing the death of a child, WMP said.

The pair are due to appear at Birmingham Magistrates’ Court on Monday.

Detective Inspector Laura Harrison said: “Arthur’s death is deeply distressing and we have specialist officers with his family as they grieve his loss.

“Our investigation continues even though we have charged two people in connection with Arthur’s death.

“If anyone has any information I would urge them to contact us.”

Detectives can be contacted through the live chat function at west-midlands.police.uk between 8am and midnight or on 101 anytime, the force said.