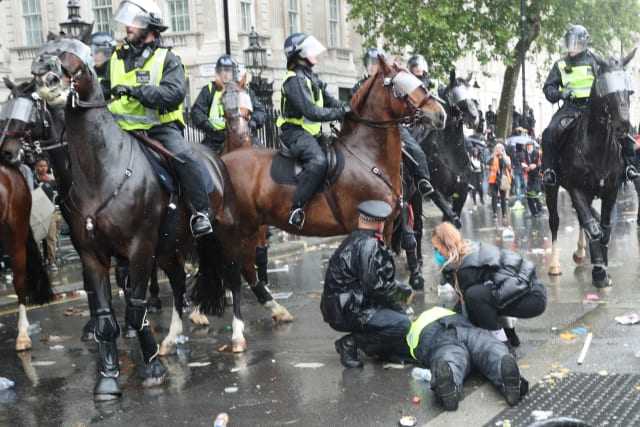 Detectives investigating violent clashes during protests in London have released fresh images of 13 suspects they want to trace.

Scotland Yard said the individuals, captured on camera, include people believed to be involved in “abhorrent behaviour”, including racist abuse, serious violence against police and violent disorder.

On Thursday, the force had released pictures of 35 suspects they want to speak to in connection with violence at the protests, during which police were pelted with missiles, smoke grenades, glass bottles and flares.

More than 100 officers have been attacked during protests in recent weeks owing to a “small minority intent on violence”, Commander Alex Murray said.

He said in a statement: “We are now releasing the images of a further 13 people we need to speak to.

“The behaviour of the people whom we now wish to identify is abhorrent, including highly offensive racial abuse to other members of the public and officers.”

“The vast majority of people who have attended the recent protests made their voices heard, and then left.

“However, a minority have attended with the sole purpose of attacking, abusing or violently confronting fellow protesters, detracting from the cause of their protest.

“We saw violence against police officers including verbal and racial abuse which is absolutely appalling. They do not come to work to be subjected to this. They come to work to keep Londoners and their families safe.

“Similarly, those people who wanted to have their voices heard and protest should not be subject to violence from others.”

The images were released after officers combed through hours of phone footage, CCTV and body-worn cameras – and the force said there was a “high likelihood” more pictures of new suspects will follow.

Andrew Banks, 28, from Essex, was jailed for two weeks on Monday after admitting urinating next to a memorial to Pc Keith Palmer, who was stabbed to death in the 2017 Westminster terror attack.

Daniel John Allan, 35, and James Meikle, 38, were remanded in custody at Westminster Magistrates’ Court on Monday after admitting attacks on police officers.

Thousands have taken to the streets in anti-racism protests across the UK, with global demonstrations sparked by the death of African-American George Floyd in police custody in the US last month.

He died after a white police officer held him down by pressing his knee into his neck for almost nine minutes in Minneapolis on May 25.

Anyone with footage can submit it at: ukpoliceimageappeal.co.uk.