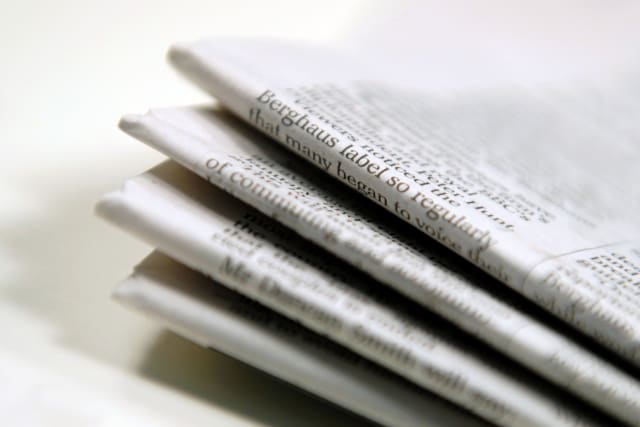 The Yorkshire Post and Western Mail newspapers were among the top winners at the Regional Press Awards for 2019.

As well as the accolade for daily newspaper of the year (above 400,000 monthly reach), The Yorkshire Post also collected the supplement of the year award for its TdY Magazine.

Reporter Greg Wright was named business and finance journalist of the year while Simon Hulme won the daily photographer of the year award.

The Western Mail was also crowned daily newspaper of the year (below 400,000 monthly reach), with journalist Carolyn Hitt winning the columnist of the year award for a daily paper (alongside Allison Morris of The Irish News) and Amanda Powell being dubbed feature writer/long form journalist of the year.

They were among the winners across some 38 award categories announced by the Society of Editors on Friday.

Due to the coronavirus crisis, a planned awards gala was replaced by a live online YouTube video event on Friday afternoon.

With local journalism one of the industries put under strain by the Covid-19 pandemic, the Society of Editors has been celebrating the important work of the regional press through its #LoveLocalMedia campaign.

Supporters are encouraged to share the hashtag on social media.

The free weekly newspaper of the year award went to the Islington Tribune while HullLive scooped the website of the year gong.

The Birmingham Mail was chosen as joint winner for the daily newspaper campaign of the year category for its focus on the Birmingham pub bombings.

The judges also gave top marks to the Power up the North campaign run jointly by titles from publishers Newsquest, Reach and JPIMedia.

Harriet Clugston, of RADAR AI (a news service using artificial intelligence to help create stories which forms part of the PA news agency), and Aimee Stanton, of JPI Media, were both named as data journalist of the year.

Judges handed the Cambridge News the daily paper front page of the year award for its “They tried to make the world a better place” splash honouring two young victims of the London Bridge terror attack, Jack Merritt and Saskia Jones.

The Herald on Sunday scooped the weekly paper front page of the year award for its “Choose something” issue, calling on MPs to be decisive on Brexit.

In a video message, Culture Secretary Oliver Dowden paid tribute to the regional press and the “unique role” it plays in “holding local politicians to account and in building a sense of community”.

Mr Dowden said he found questions asked by local journalists at the regular coronavirus government briefings among the trickiest to deal with as they came from reporters close to their communities.

– SUPPLEMENT OF THE YEAR
Winner: TdY Magazine, The Yorkshire Post
Highly commended: Back Where We Belong, Express & Star

– FRONT PAGE OF THE YEAR – WEEKLY PAPER, SPONSORED BY HOLDTHEFRONTPAGE
Winner: “Choose something”, The Herald on Sunday
Highly commended: Shameless/ Killed for the Cameras, Sunday Life

– DIGITAL INITIATIVE OF THE YEAR – SPONSORED BY FACEBOOK JOURNALISM PROJECT
Winner: Brexit Voices from Northern Ireland, Belfast Telegraph
Highly commended: Shaped by a River: Tales of the Tay, The Courier