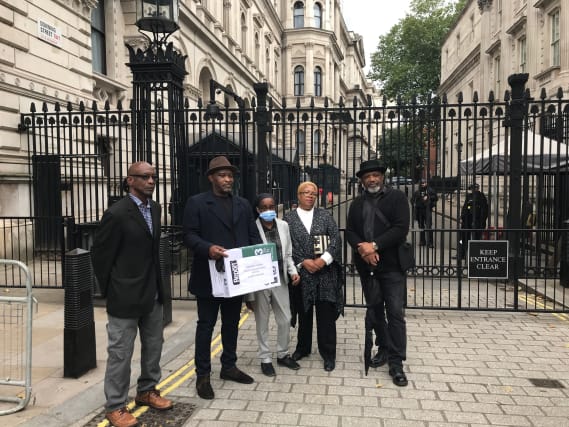 Windrush campaigners have delivered a petition to Downing Street signed by more than 130,000 people calling for action to address failings which led to the scandal.

The move comes just days before the 72nd anniversary of when the SS Empire Windrush arrived at Tilbury Docks on June 22 1948 carrying some 500 people from Jamaica.

A report published in March found the Windrush scandal – which saw people with a right to live in the UK were wrongfully detained or deported to the Caribbean – was “foreseeable and avoidable” with victims let down by “systemic operational failings” at the Home Office.

The department demonstrated “institutional ignorance and thoughtlessness” towards the issue of race and the history of the Windrush generation, the review found.

Official figures published last month revealed fewer than 5% of claims made under a compensation scheme for victims have been paid out.

Mr Vernon said: “People were promised justice and reform. The Government needs to show it’s listening and that it’s honouring its promises.

Satbir Singh, chief executive of the Joint Council for the Welfare of Immigrants, said the group welcomed the review, but added: “Now it’s time to learn those lessons, and for the government to share its timetable for implementing the recommendations.”

Author of the review Wendy Williams said warning signs were apparent for a number of years and there was a “culture of disbelief and carelessness” when dealing with applications, adding: “This was born out of a conviction that the hostile environment policy would be effective, was effective, and should be pursued at all costs.”

It called for ministers to admit serious harm was inflicted on people who are British and to provide an “unqualified apology” to those affected and the wider black African-Caribbean community.

Other recommendations include commissioning a full review and evaluation of the hostile environment policy and that the Home Office should establish an overarching strategic race advisory board.

Since the scandal emerged in 2018, more than 11,700 people have been given “some form of documentation”, Home Secretary Priti Patel told the House of Commons in March.

The Home Office identified 164 people who had been deported or put in detention since 2002 amid the Windrush scandal, records said.

Official figures showed the Home Office has paid GBP362,996 to 60 people, including one payment in excess of GBP100,000, during the first year of the compensation scheme.

Some 1,275 claims were made by the end of March, with the number received by the department decreasing each quarter since it launched.

The compensation fund has an estimated budget of at least £200 million, with the Home Office adding that it has also made offers of approximately £280,000 which have yet to be accepted.