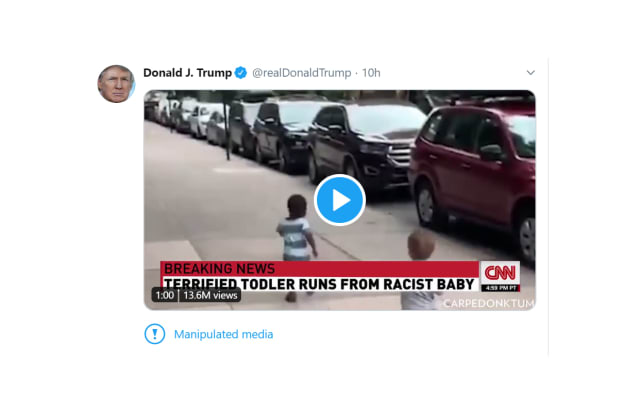 The clip is edited to look like it appeared on a CNN broadcast, showing a black toddler running away from a white child, with a fake CNN breaking news caption reading: “Terrified todler (sic) runs from racist baby.”

It then claims to reveal “what actually happened”, showing the original version of events where the pair are playing – the way CNN had reported it – before accusing “fake news” of being the root cause of problems in America.

Underneath the US president’s tweet, the social network added a “manipulated media” label.

Clicking on the warning, users are told: “In September 2019, CNN reported on a viral video about a friendship between two toddlers.

“On Thursday, the president shared a version of the video which many journalists confirmed was edited and doctored with a fake CNN chyron.”

The move comes amid heightened racial tensions in the US following the death of George Floyd while in police custody, which has driven the Black Lives Matter movement across the globe.

In May, the firm placed fact-checking labels on two tweets from the president’s personal account which made claims about fraud in US postal voting, as well as hiding a post about protests in the city of Minneapolis after Mr Floyd’s death.

Mr Trump responded by signing an executive order to restrict legal protections allowing social media sites to remove content they deem inappropriate, a power he described as being akin to censorship.

CNN’s communications team replied to the president’s latest tweet, saying: “CNN did cover this story – exactly as it happened.

“Just as we reported your positions on race (and poll numbers).

“We invite you to do the same. Be better.”

Meanwhile, Facebook has not taken any action on the same video shared by Mr Trump’s account on their platform.

Chief executive Mark Zuckerberg has come under fire by some staff for their stance on the matter.

However, the tech giant did remove campaign adverts by Mr Trump and vice president Mike Pence that featured an upside-down red triangle – a Nazis symbol used to designate political prisoners in concentration camps.