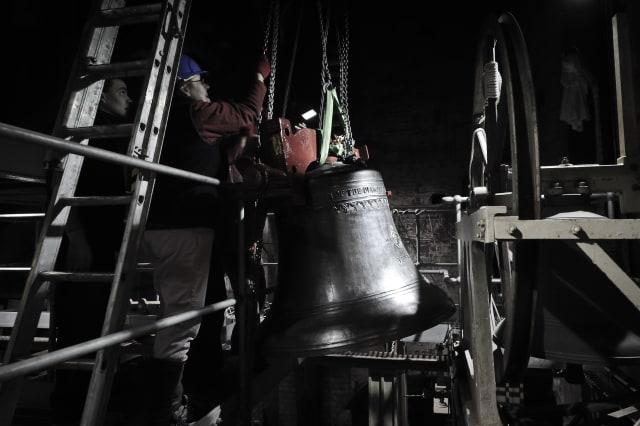 Almost 5,000 people in the UK have been learning how to bell-ring through lockdown – without a bell.

Some 4,877 people living in the UK and a further 54 from Ireland have been practising the centuries-old activity through a virtual platform called Ringing Rooms.

Ringing Rooms was set up in late March by American bell-ringers Leland Paul Kusmer and Bryn Reinstadler, and since then has attracted thousands of users who are mostly based in the UK.

In normal times, a group of bell-ringers create music in a church tower by moving ropes up and down in a co-ordinated sequence known as a method.

Bell-ringer James Ramsbottom, who is based in Birmingham, said the demographic of bell-ringers tends to be the older generation, so the virtual platform has given them a way to connect while shielding during lockdown.

The 30-year-old structural engineer said he used to practise the hobby daily before lockdown, and comes from a family of bell-ringers.

Mr Ramsbottom, who has been ringing bells for two decades, said: “It usually works alongside video calls. Everybody logs into the same virtual room. The bells are rung by tapping keys on a keyboard and we follow mathematical patterns.

“It’s a case of knowing how the sequence patterns work – we are following the same patterns we would in a bell tower.

“It’s made lockdown better, it’s fantastic to be able to carry on.”

He added he has made friends in North America through the virtual platform.

“It’s just as easy to ring with someone at the other side of the world as with someone down the road from you,” he said.

Swindon-based bell-ringer Deb Tiltman, who has been a regular bell-ringer for 55 years, said virtual bell-ringing has made her isolation “much better”.

Ms Tiltman, 70, said: “When you are doing proper bell-ringing it involves your whole body, so you feel the rhythm of it.

“We can now practise that rhythm from home. It’s been wonderful, it’s been absolutely amazing.”

“I’m absolutely certain it will keep going beyond lockdown,” she added.

Another virtual bell-ringer from the UK, Mark Davies, said the platform has been “an incredible phenomenon in the world of bell-ringing”.

Bell-ringing is likely to be one of the last pastimes to be resumed as lockdown restrictions are eased, because it involves a group of people exercising in a confined space, and many hobbyists could be older and more vulnerable to the virus.