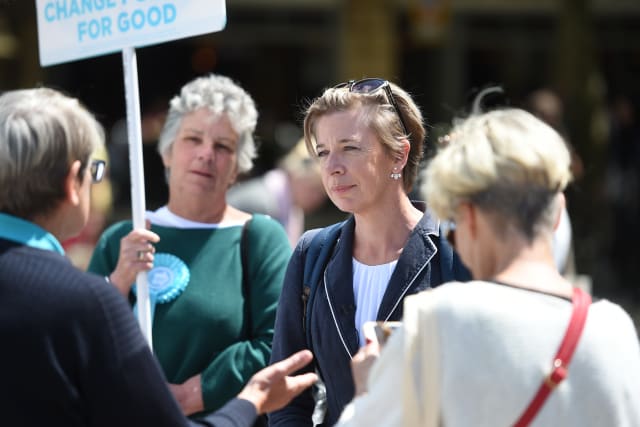 Katie Hopkins has been permanently suspended from Twitter for breaking the platform's rules on hate speech, the social media giant has confirmed.

The former Apprentice star turned far-right commentator had more than one million followers on the platform.

Hopkins has sparked outrage on numerous occasions in recent years with comments on race, religion and immigration – which had led to her becoming the subject of a petition urging Twitter to remove her from the site.

Katie Hopkins
Apprentice star Katie Hopkins attends a photocall to launch the Freeview Playback Wimbledon Simulator on the South Bank in central London. (Photo by Ian West - PA Images/PA Images via Getty Images)
LONDON - JULY 05: Katie Hopkins poses for a picture at the Hairspray Premiere at the Odeon Cinema Leicester Square on July 05, 2007 in London, England. (Photo by Danny Martindale/FilmMagic)
(EXCLUSIVE, Premium Rates Apply) LONDON - SEPTEMBER 03: Katie Hopkins attends the TV Quick and TV Choice Awards Sultans of Swing Gift lounge at the Dorchester Hotel on September 03, 2007 in London. (Photo by JAB Promotions/WireImage) *** Local Caption ***
Tv Quick And Tv Choice Awards At The Dorchester Hotel, London, Britain - 03 Sep 2007, Katie Hopkins (Photo by Brian Rasic/Getty Images)
LONDON - MARCH 11: Katie Hopkins arrives at the TRIC Awards held at the Grosvenor House Hotel on March 11, 2008 in London, England. (Photo by Fred Duval/FilmMagic)
Artist Frank Shepherd puts the final touches to his creation of Katie Hopkins who has been unveiled as this year's Edenbridge Bonfire Society celebrity guy during a photcall in Edenbridge, Kent. Picture date: Wednesday October 30, 2013. See PA Story SOCIAL Bonfire Photo credit should read: Gareth Fuller/PA Wire (Photo by Gareth Fuller/PA Images via Getty Images)
BOREHAMWOOD, ENGLAND - JANUARY 07: Katie Hopkins enters the Celebrity Big Brother house at Elstree Studios on January 7, 2015 in Borehamwood, England. (Photo by Karwai Tang/WireImage)
BOREHAMWOOD, ENGLAND - FEBRUARY 06: Katie Hopkins is evicted from the Big Brother house at Elstree Studios on February 6, 2015 in Borehamwood, England. (Photo by Ian Gavan/Getty Images)
DONCASTER, ENGLAND - SEPTEMBER 25: Commentator Katie Hopkins during the UK Independence Party annual conference where she spoke to a fringe group about electoral reform on September 25, 2015 in Doncaster, England. After increasing their vote share following the May General Election campaign, the UKIP conference this year focussed primarily on the campaign to leave the European Union ahead of the upcoming referendum on EU membership. (Photo by Ian Forsyth/Getty Images)
British newspaper columnist Katie Hopkins (C) listens as UK Independence Party (UKIP) leader Nigel Farage, (Not Pictured) addresses delegates at the UKIP National Conference at Doncaster Racecourse, in Doncaster, northern England on September 25, 2015. UKIP came first in European Parliament elections last year and garnered almost four million votes in a general election earlier this year even though it only won one seat in parliament. AFP PHOTO / OLI SCARFF (Photo credit should read OLI SCARFF/AFP via Getty Images)
Katie Hopkins outside the Royal Courts of Justice in London, where Sergeant Alexander Blackman, who is serving life after being found guilty of murdering an injured Afghan fighter faces a wait until next week to see if he will be freed pending a new challenge against his conviction. (Photo by Philip Toscano/PA Images via Getty Images)
Katie Hopkins poses for a selfie with a Brexit Party supporter in Peterborough city centre, as voting gets under way in the Peterborough by-election. (Photo by Joe Giddens/PA Images via Getty Images)
LONDON , UNITED KINGDOM - JULY 11: Katie Hopkins is seen as British far-right activist and former leader and founder of English Defence League (EDL), Tommy Robinson, whose real name is Stephen Yaxley-Lennon, arrives at the Old Bailey on July 11, 2019 in London, England. Tommy Robinson will be sentenced this morning after he was found to have committed contempt of court over a video he live-streamed on social media that featured defendants in a criminal trial. (Photo by Luke Dray/Getty Images)
In the first official photos since her recent surgery, Katie Hopkins is pictured in the LBC studios in Leicester Square, London, as the station announces that she is joining their weekend line-up. As part of LBC's new schedule, Katie will present her own Sunday morning programme (10am to 12noon), starting on April 10th.
Up Next

"Keeping Twitter safe is a top priority for us – abuse and hateful conduct have no place on our service and we will continue to take action when our Rules are broken," the company said.

Hopkins has been heavily criticised in the past for her comments, including comparing migrants to cockroaches and claiming the photograph of a dead Syrian boy lying on a beach that sparked a wave of compassion across Europe was staged, as well as stating that dementia sufferers should not block hospital beds.

She has also recently criticised the Black Lives Matter movement as well as the Government's decision to offer free meals to children during school holidays – a campaign driven by Manchester United footballer Marcus Rashford.