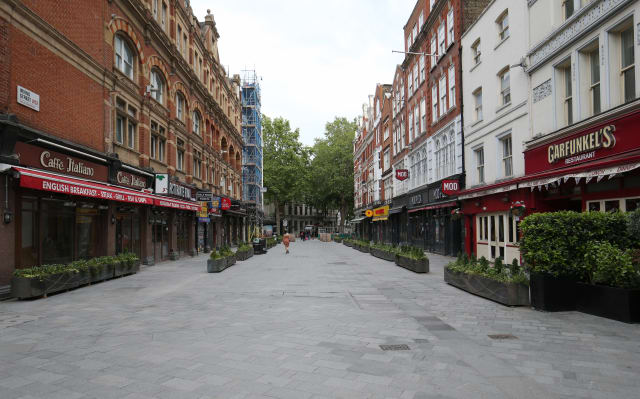 The Government has extended measures to prevent landlords from evicting businesses at the end of the month.

Tenants cannot be evicted until at least the end of September, moved forward from the original June 30 date first introduced at the start of lockdown, as many continue to struggle with rents after sales ground to a halt.

The Business and Communities Departments also announced the launch of a voluntary code of practice between landlords and tenants, including the hospitality and retail sectors.

This is an attempt to provide clarity for businesses when discussing rents and ability to pay, as high streets and other companies start to reopen, it said.

But some property businesses have been facing their own financial difficulties and have creditors to satisfy.

Intu and Hammerson, which both own shopping centres across the UK, had been attempting to shore up their balance sheets before the crisis.

There has also been a row brewing in the pubs sector, with some landlords demanding tenants declare how much financial support they have received from the Government, and requesting it accordingly.

The new code of practice will encourage tenants to continue paying their rent in full if they can – with help from Government subsidies and financial support including tax breaks – but recognising that landlords should offer support.

Banning evictions from commercial premises until the end of September at the earliest comes as the hospitality sector pushes ministers to reduce the two-metre social distancing rule, and a review is under way.

Pubs, cafes and restaurants remain closed and can only provisionally reopen from July 4, although many smaller establishments have said the rules mean their businesses will become unviable without enough customers allowed inside.

Communities Secretary Robert Jenrick said: “As our high streets come to life and our town centres open for business, it is crucial that both landlords and tenants have clarity and reassurance as they seek to keep their finances stable and bounce back.

“That is why we are extending measures to protect those who are unable to pay rent from eviction so that businesses have the security they need to plan for their futures.”

He pointed out that the new code was developed and signed alongside the British Chambers of Commerce, British Property Federation, British Retail Consortium, the Commercial Real Estate Finance Council, Revo, the Royal Institution of Chartered Surveyors, and UKHospitality.

British Property Federation chief executive Melanie Leech said the move comes as landlords and tenants continue working together in the majority of cases.

She added: “The success of landlords and tenants working together as economic partners is vital to the UK’s recovery and to help ensure that viable businesses in distress as a result of coronavirus are supported, to protect both people’s jobs and the local authorities, savers and pensioners who own the majority of our town centres.”

Helen Dickinson, chief executive of the British Retail Consortium, said: “The ongoing pandemic presents an enormous threat to the survival of thousands of retailers, and the millions of jobs they support.

“The necessary closure of most shops during lockdown has created a gaping hole in many retailers’ finances.

“This has been exacerbated by continued rent demands on stores around the country, even where most have been closed for business. A solution is needed.”

Comedian Joe Lycett has launched a campaign on the issue, highlighting attempts by landlord Hondo Enterprises, run by DJ and socialite Taylor McWilliams, to evict Nour Cash & Carry, a popular grocer in Brixton, south London. A petition against the eviction has more than 50,000 signatures.