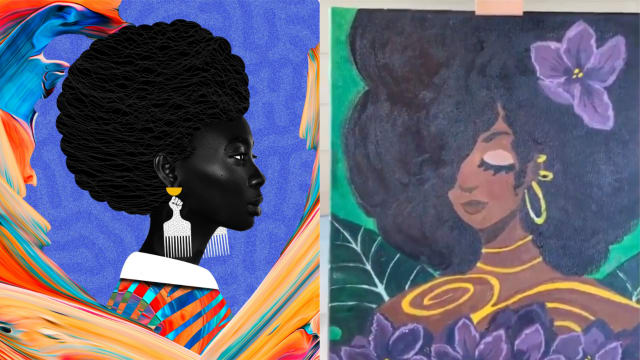 Black artists in the United States have used their creativity to honour Juneteenth on Friday.

Juneteenth, a word created by joining the words “June” and “nineteenth” together, marks the day in 1865 when enslaved African American people in the state of Texas were told that they were free.

The day is honoured annually on June 19, as many see it as marking the end of slavery in the United States.

Artists have honoured the day by creating paintings, digital drawings, and murals.

Artist and author Maya Penn from Atlanta, Georgia created a painting to honour the annual day.

Ms Penn, 20, told the PA news agency: “I have been an artist ever since I could hold a pencil.

“In light of the revolution happening around the world, it is a day for the Black community to have a much needed celebration of our ancestors and a hopeful look toward more progress for a better future.”

Artwork by Temi Coker, 27, from Texas was described as “a visual of what Black joy looks like.”

Tatiyana Stubbs, 20, from New Jersey, told PA: “Today is such a meaningful day because it’s when we truly were able to be free across the board and I wanted to represent my respect and love for my ancestors through my art.

“Being a black female is something I take much pride in, so having a female being the centre of my art is important.”

Juneteenth became an official state holiday in Texas in 1980.

Since then, 45 other states and the District of Columbia have also recognised the day, with several using Friday to campaign for the day to become a national holiday.

Juneteenth was marked across the US with a continuation of the protests that have been seen across the globe since May.

The protests began in Minneapolis after the death of George Floyd on May 26, a 46-year-old black man who was killed by a police officer.

Former US President Barack Obama wrote in a statement: “Juneteenth has never been a celebration of victory, or an acceptance of the way things are.

“It’s a celebration of progress.

“It’s an affirmation that despite the most painful parts of our history, change is possible, and there is still so much work to do.”