Anti-racism protests set to continue over the weekend 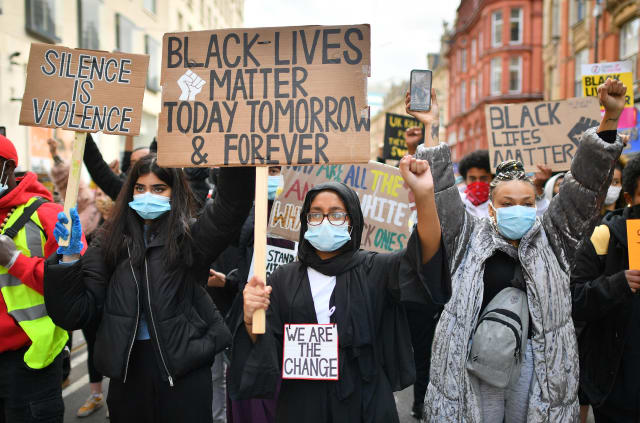 Anti-racism protests are expected to continue this weekend, with police expecting large crowds in the capital.

Scotland Yard said it is hoping to avoid violent clashes during demonstrations in London over the weekend following more than 100 officers being assaulted at previous protests.

Thousands of people have taken to the streets in anti-racism protests across the UK sparked by the death of African American George Floyd in the US last month.

The Metropolitan Police have arrested almost 230 protesters and released 35 images of people wanted over violent clashes during the recent anti-racism protests.

But Education Secretary Gavin Williamson said Britain should be proud of its “incredibly rich” history, which has changed things for the better across the globe.

He told the daily Downing Street briefing on Friday it was important that children were taught both the good and the bad aspects of British history.

Mr Williamson added: “Our national curriculum covers the issue of the British Empire and the incredibly rich history this nation has.

“And it is absolutely vitally important, incredibly important, that when children are learning about our nation’s history they learn all aspects of it, both the good and the bad.

“But we mustn’t forget that in this nation we have an incredibly rich history and we should be incredibly proud of our history because time and time and time again this country has made a difference and changed things for the better right around the world.”

Hundreds of protesters staged a four-hour Black Lives Matter rally and march through Birmingham city centre on Friday, pausing for silences on some of the city’s main thoroughfares.

Three police officers were pictured taking a knee with a demonstrator during the Peaceful Protest for Black Lives event, which began in Birmingham’s Victoria Square.

A silence in tribute to George Floyd was held in the square during Friday’s event, while another silence was observed as around 500 marchers paused on tramlines in Corporation Street.

The Metropolitan Police’s Commander Alex Murray said more than 100 officers have been assaulted since the end of May in demonstrations sparked by the death of Mr Floyd in the US.

Far-right demonstrators clashed with police and Black Lives Matter protesters on Saturday as they took over areas near the Palace of Westminster and Trafalgar Square.

There had been violent scenes in the capital the previous weekend during an anti-racism protest after Mr Floyd died when a police officer held him down by pressing his knee into his neck for almost nine minutes in Minneapolis on May 25.

Mr Murray said: “I really hope we’re not going to see what we saw last weekend or the weekend before.

“We don’t have any information there’s anyone from the right wing attending but we have got information that large crowds of people will be attending.”

Police are urging people not to protest during the ongoing Covid-19 pandemic, while lockdown regulations still prohibit gatherings of more than six people in England.

The Church of England has called historic links to slavery through clergymen a “source of shame” amid apologies from British organisations over connections to the slave trade.

The Bank of England has also condemned and apologised for “inexcusable” links that former governors and directors had with the slave trade.

It comes after insurance giant Lloyd’s of London and pub chain Greene King said they will devote large sums to projects assisting minorities.