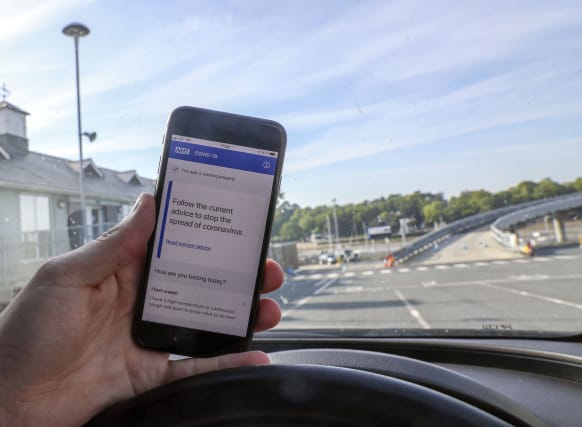 After months of development, the Government has abandoned its own contact-tracing app in favour of a design by tech giants Apple and Google.

The change came on Thursday, following criticism over the app’s reliance on public support, and data protection concerns.

The PA news agency gives a timeline of the main developments of the NHSX app:

Health Secretary Matt Hancock announces the new NHSX app for contact tracing. He says it is currently being tested and the Government is working with world-leading tech companies and experts in clinical safety and digital ethics.

He says: “If you become unwell with the symptoms of coronavirus you can securely tell this new NHS app and the app will then send an alert anonymously to other app users that you’ve been in significant contact with over the past few days, even before you have symptoms so that they know and can act accordingly.”

Matt Hancock describes the app as “crucial” for preventing the transmission of coronavirus, and says the contact tracing operation would be functioning in a “matter of weeks”.

He tells BBC Radio 4’s Today programme: “Because the combination of mass testing and contact tracing alongside it, both with people doing the contact tracing and with technology, a new app that will help to identify who people have been close to – these things are so crucial to holding down the rate and level of transmission of the disease.”

Professor Christophe Fraser, who is leading the team developing the app, says if the policy were pursued earlier it could have saved lives.

Prof Fraser, from Oxford University’s Big Data, also tells The Andrew Marr Show: “For this intervention alone to stop resurgence of the epidemic, about 60% of the population would have to use the app.”

Matt Hancock tells the daily Downing Street press conference the NHSX app will be available from “the middle of May,” adding he wants “as many as possible” to download it.

The Prime Minister’s official spokesperson describes the app as “a key part of the surveillance programme going forward”.

Housing Secretary Robert Jenrick describes plans for contact tracing going forward as a “multi-faceted strategy with the (NHS) app at its heart.”

He tells the Downing Street press conference he is “optimistic” the public will download the app.

Transport Secretary Grant Shapps says the app will be piloted on the Isle of Wight before being rolled out more widely later in May.

He says downloading the app is “the best possible way to help the NHS,” stressing that users’ data would be completely confidential.

But NHS England national medical director Professor Stephen Powis describes the app as likely to be “one component of a number of measures that will be needed”.

The app is launched on the Isle of Wight, while ministers say it could be rolled out across the country within weeks.

But Amnesty International UK warns the public’s right to privacy could become “another casualty” of coronavirus through the use of a contact-tracing app.

Welsh First Minister Mark Drakeford also voices these concerns, and First Minister for Scotland Nicola Sturgeon says her Government was not building its strategy around the app.

Dr Orla Lynskey, associated professor of law at the London School of Economics, gives evidence to the joint Human Rights select committee, saying there were privacy concerns with the NHSX smartphone app.

Matthew Gould, chief executive of NHSX, tells the committee data stored on the app would not be shared with tech giants Apple and Google or the police.

Matt Hancock describes the app as “a very, very positive step in terms of us all being able to get some of our liberty back”.

He adds there is “high privacy” in the app and describes Amnesty International UK’s allegations about potential data protection breaches as “completely wrong”.

Labour leader Sir Keir Starmer says he hopes the trial succeeds but warns that the Government needs other contact tracing measures in place to avoid putting “all your eggs in the basket of this particular app”.

Tory Isle of Wight MP Bob Seely tells BBC Radio 4’s World At One the trial of a coronavirus tracking app on the island is off to a “very, very strong start.”

Meanwhile, a report by the Joint Human Rights Committee warns that assurances by ministers about the app’s intended privacy protections would not carry any weight unless they were enshrined in law.

Robert Jenrick says about 40% of people on the Isle of Wight were using the NHS app in a pilot.

Meanwhile, experts raise concerns about the app’s reliance on self-reporting and the risk it could be used to “prank” people.

NHSX admits that some new Huawei phones and some older mobiles cannot run the NHS contact tracing app being trialled on the Isle of Wight.

Dr Geraint Lewis, who is in charge of the development of the NHS Covid-19 app, says the new tool will only work with newer operating systems on Apple and Samsung phones.

Labour MP Stephen Doughty highlights the differences between contact tracing apps being advocated in different parts of the UK and Ireland.

He tells the Commons: “The contact tracing app that the UK Government is developing is apparently different to the one that the Irish Government is advocating, which may create significant difficulties not only on the island of Ireland, but also in relation to travel to and from the rest of the UK via, for example Welsh, Scottish and English ports.”

Ministers exceed the target of hiring 18,000 contact tracers, with 3,000 more than planned.

Meanwhile, Downing Street announces the NHS contact tracing app will be launched across the country in the “coming weeks”, despite Health Secretary Matt Hancock suggesting it would be rolled out in mid-May.

The tech giants worked together to create an Exposure Notifications System which can be built into health agency apps, using Bluetooth to track contact with others and alert users when they may have been exposed to the virus.

The contact tracing system is launched with the help of 25,000 contact tracers – but without the NHS app being rolled out beyond the Isle of Wight.

Matt Hancock says the human contact tracing measures need to be introduced before the app, “getting people used to the idea” first.

Psychologists at the British Psychological Society (BPS) warn people’s behaviour will determine the success or failure of the coronavirus contact tracing app.

Matt Hancock downplays the importance of the contact tracing app for smartphones, saying the public needed advice “given by human beings” to gain “confidence” in the new track and trace system.

Health minister Lord Bethell, who is one of those responsible for the smartphone app, announces to MPs that the app may not be ready until the winter.

He told the Science and Technology Committee that the pilot of the app on the Isle of Wight had been successful, but said the app “isn’t the priority at the moment”.

Apple and Google take over the design of the Track and Trace app from the NHS’s digital arm NHSX as the Government abandons its own app.

Officials said the Government’s app was highly inaccurate when used on iPhones – only identifying around 4% of contacts – while the Apple-Google framework recorded 99% of all contacts. Only 73% of cases were contacted overall.