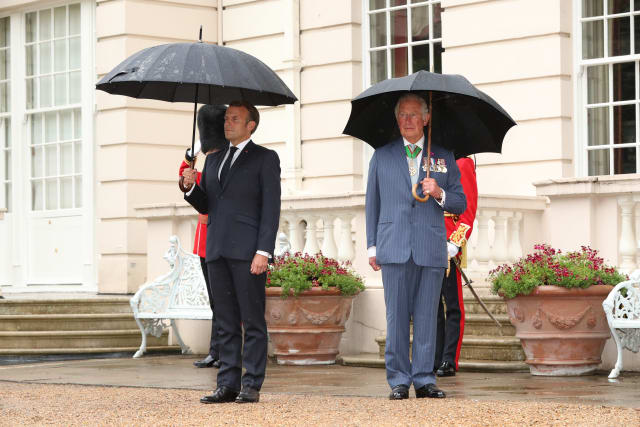 French President Emmanuel Macron has been welcomed to the UK with a ceremony of pomp and pageantry as he marked the 80th anniversary of General Charles de Gaulle’s famous wartime broadcast.

The Prince of Wales and Duchess of Cornwall greeted France’s leader at their official London home – but all remained two metres apart following social distancing guidelines.

Mr Macron and Boris Johnson will hold bilateral talks later to discuss the coronavirus crisis and other issues, with the Prime Minister indicating he would raise travel between the UK and France at the meeting.

The French president arrived at Clarence House after attending events in his homeland to commemorate De Gaulle’s rallying cry on the BBC, made in June 1940, when he urged the people of France to resist the Nazi occupation.

The wartime leader of the Free French said: “I call upon all French servicemen of the land, sea, and air forces; I call upon French engineers and skilled armaments workers who are on British soil, or have the means of getting here, to come and join me.”

During his address, a pivotal moment in his country’s history, he added: “I call upon all Frenchmen who want to remain free to listen to my voice and follow me.”

De Gaulle and the Free French made their wartime base in nearby Carlton Gardens and from the building began to build up their forces.

London’s support for the exiled French will be recognised by Mr Macron when he awards the capital France’s highest decoration – Legion d’Honneur.

The president arrived in his official plane – a Dassault Falcon 7X – decorated in the national colours of France at RAF Northolt in west London.

An RAF aircraft used by the Prime Minister and senior royals for official travel is to have a makeover in the colours of the Union flag, but opposition MPs have reacted furiously to the bill for the paint job, which will cost almost £1 million.

Mr Johnson has said four surviving French resistance fighters “Compagnons” of the Order of Liberation – Edgard Tupet-Thome, 100, Daniel Bouyjou-Cordier, 99, Hubert Germain, 99, and Pierre Simonet, 98 – will receive honorary MBEs in tribute to their “courage and sacrifice in defending us and the whole world from fascism”.

The awards will be presented at a ceremony in France in the coming months.

After the national anthems of France and the UK were played Guard Commander, Major Piers Gambarini, invited Mr Macron to inspect the servicemen and he was accompanied by Charles, with the two men sheltered under umbrellas as the rain which had deluged London for much of the day continued to fall.

France’s leader walked past the servicemen who when not performing ceremonial duties are fighting soldiers.

The two men later posed for an official photograph before holding talks in Clarence House.