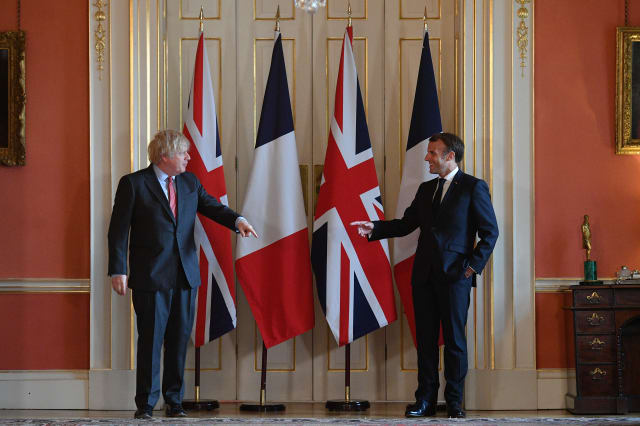 Boris Johnson and Emmanuel Macron spoke of the coronavirus economic recovery during the French president’s visit to London, which marked the 80th anniversary of a historic wartime broadcast.

He marked the anniversary of the BBC broadcast, which rallied French people in the aftermath of the occupation of France, by visiting the city – his first foreign visit since the Covid-19 outbreak.

During their meeting inside Number 10, Mr Johnson and Mr Macron were expected to discuss the UK’s current two-week quarantine for all arrivals, amid reports that the French president would urge the Government to revisit the decision.

A Downing Street spokeswoman said both reflected on the sacrifices made in the Second World War and the “enduring strength of the UK-France relationship”, as well as the Covid-19 pandemic.

“They agreed that the partnership between our countries will be crucial in overcoming the coronavirus pandemic and ensuring the global recovery is green and sustainable.”

As part of the visit to Number 10, the two leaders viewed artefacts documenting General de Gaulle’s time in London and his partnership with Sir Winston Churchill.

Both leaders maintained social distancing as they discussed the items, which included a letter from General de Gaulle thanking Britain’s wartime leader for his support.

At one point Mr Johnson appeared to take a step back from his French counterpart, telling Mr Macron they had to stand two metres apart.

The Red Arrows and their French equivalent, La Patrouille de France, then performed a flypast to mark the anniversary of the Appel, observed by both leaders, who stood in Horse Guards Parade.

A tweet from the official account for the royal family said the Queen spoke with Mr Macron by telephone during his visit.

Earlier on Thursday, Mr Macron was welcomed by the Prince of Wales and Duchess of Cornwall, who greeted him at Clarence House.

The French leader then delivered a speech in Carlton Gardens, where the Free French had their headquarters.

Mr Macron praised the support the fledgling forces of Free France received from the UK, especially their “first weapon, a BBC microphone” used by General de Gaulle to give his address.

Standing in the shadow of General de Gaulle’s statue, he said: “This is where de Gaulle was able to call on the French people to join the resistance. The soldiers of the shadows.

“Because 80 years ago today, on June 18 1940, the United Kingdom gave Free France its first weapon, a BBC microphone.

“So the airwaves carried de Gaulle’s determined words and spirit of resistance, which built a bridge across the Channel for those refusing to be enslaved or give up their freedom.”

Behind the president was the framed insignia of France’s highest decoration,the Legion d’Honneur, awarded to London for its support of France during the Second World War.

Mr Macron paid tribute to London as the “cradle of Free France” and went on to say: “I wanted to express the French Republic’s infinite gratitude to the city of London by awarding it, in a wholly exceptional capacity, the cross of the Legion d’Honneur.”

It had been presented to Charles, who replied, in French and English: “Your presence here today, Mr President, is a powerful demonstration of the bond between our two countries, and between our people, and of our shared determination that it must endure.

“It is a bond forged through common experience, sanctified through shared sacrifice and burnished by the deep affection in which we hold each other.

“Time and again our countries have stood together against tyranny and oppression, joining arms to defend the values we hold most dear.”

Listening to the open-air address were French and British dignitaries including the Foreign Secretary Dominic Raab and London Mayor Sadiq Khan.

The event was held with social distancing rules observed and Charles greeted the visiting president with a namaste gesture, clasping the palms of his hands together.