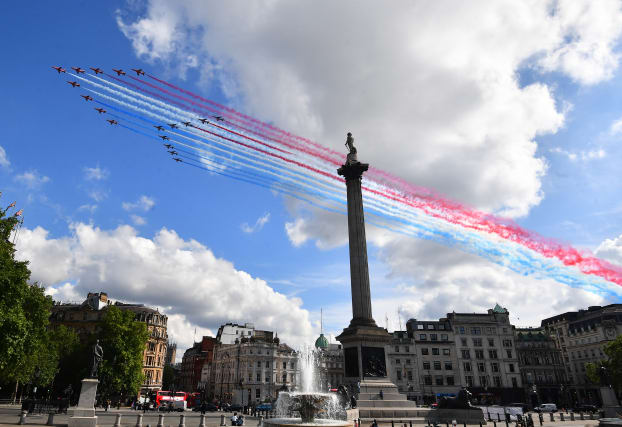 A colourful flypast by the Red Arrows and their French equivalent La Patrouille de France welcomed President Emmanuel Macron to London on Thursday.

Mr Macron was visiting London to mark the 80th anniversary of the wartime broadcast by General Charles de Gaulle, which rallied French people in the aftermath of the occupation of the country.

Mr Macron, speaking in French in the shadow of General de Gaulle’s statue in Carlton Gardens, in central London, said: “This is where de Gaulle was able to call on the French people to join the resistance. The soldiers of the shadows.

“Because 80 years ago today, on June 18 1940, the United Kingdom gave Free France its first weapon, a BBC microphone.

“So the airwaves carried de Gaulle’s determined words and spirit of resistance, which built a bridge across the Channel for those refusing to be enslaved or give up their freedom.”

He was welcomed by the Prince of Wales and Duchess of Cornwall, who stood nearby during his address.

The president laid a wreath at the foot of the de Gaulle statue following a ceremonial welcome from the Prince of Wales.