Harry Dunn’s parents refused documents on ‘secret agreement’ with US 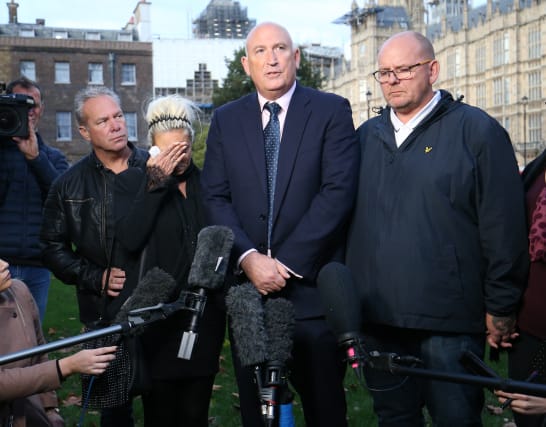 The High Court has refused an application by Harry Dunn’s parents for the Foreign Office to disclose evidence relating to a “secret agreement” between the UK and US governments which is said to have given diplomatic immunity to their son’s alleged killer.

Charlotte Charles and Tim Dunn are bringing legal action against Foreign Secretary Dominic Raab and Northamptonshire Police, claiming they acted unlawfully over the departure of Anne Sacoolas from the UK.

Mr Dunn, 19, was killed in August last year when his motorbike crashed into a Volvo driving on the wrong side of the road outside RAF Croughton in Northamptonshire.

Sacoolas, whose husband Jonathan Sacoolas worked as a technical assistant at the base, claimed diplomatic immunity following the crash and was able to return to the US.

The 42-year-old was charged with causing death by dangerous driving in December but an extradition request was refused by the US the following month.

Mr Dunn’s parents argue that the Foreign Office “acted unlawfully by proceeding as if Anne Sacoolas conclusively had immunity and/or advising other state bodies that she did”, which they say prevented Northamptonshire Police “from reaching an informed view as to the immunity issue”.

Following a preliminary hearing on Thursday, conducted remotely by video call, Lord Justice Flaux and Mr Justice Saini rejected the application for the Foreign Office to disclose further evidence ahead of a full hearing.

Lord Justice Flaux said: “We do not consider that any of the documents sought is necessary for the fair and just determination of the issues in the case, so that application is refused.”

The court also refused an application to rely on expert evidence from Sir Ivor Roberts, “one of the country’s most distinguished diplomats”.

Lord Justice Flaux said: “Whilst we, of course, acknowledge his eminence, we do not consider any of that evidence to be admissible or relevant to the issues we have to decide.”

The court directed that a full hearing of Mrs Charles and Mr Dunn’s case will be heard in October or November.

Geoffrey Robertson QC, representing Mrs Charles and Mr Dunn, earlier told the court that the Foreign Office “has through its actions obstructed a criminal investigation, under pressure from the United States”.

He argued that Mr Sacoolas had “only limited” immunity from prosecution in relation to “acts performed in the course of his duties”, and that his wife entered the UK with “none at all since she would perform no duties relating to the mission”.

Mr Robertson said the case “turns on the interpretation of a secret agreement made in 1995, and updated in 2001, between the US and UK as a result of a US request to add up to 200 technical officers as diplomatic agents at RAF Croughton”.

He said that, in 1995, the UK was “deeply concerned about this unprecedented request and the danger of media interest if crimes (in particular, road traffic-related crimes) were committed by agents and/or their dependants”.

Mr Robertson asked the court to order the Foreign Office to disclose historical documents about the 1995 agreement, as well as notes of all phone calls and other messages about Mr Dunn’s death involving Foreign Office officials.

He submitted: “It is important that the claimants and the court are able fully to understand why the Foreign Office appears to have concealed information from Northamptonshire Police and conceded the position in relation to diplomatic immunity contended for by the Americans.”

In his opening remarks to the court, Mr Robertson said there had been a number of “inaccurate reports” in the media that the court would be asked to determine the diplomatic immunity issue at the hearing on Thursday.

He added: “Perhaps I will be allowed to say that it will not, it will be looking only at the question of whether the defence should disclose certain documents.”

He argued that the Foreign Office “has already given extensive disclosure, well in excess of what is strictly required” and the claimants’ request for further material should be refused.

Sir James also rejected the “serious allegation” that the Government had failed to disclose relevant documents to Mr Dunn’s parents, saying: “There is no basis whatever for the repeated assertion, both in these proceedings and the media, that the Secretary of State has failed in any way to comply with his duty of candour.”

Mr Dunn’s parents released a statement ahead of Thursday’s hearing, saying: “All we want is for Anne Sacoolas to come back.”

They told the PA news agency it was clear that “something went badly wrong in London” before their son’s alleged killer left the UK.

In the statement, they said: “We couldn’t believe when Anne Sacoolas was allowed to leave the UK and still can’t believe it now.

“We know the American government are responsible for that. You do not get to kill someone and walk away.

“However, it is clear to us that things went badly wrong in London too and that the UK Government allowed her to leave unlawfully.”