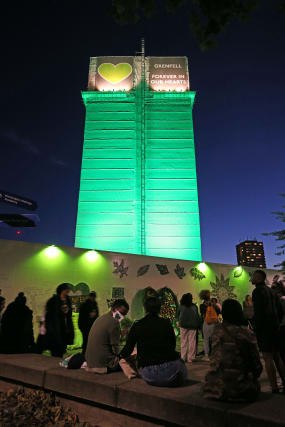 The Government has been warned it still “has a long way to go” to strip all high-rise buildings of dangerous cladding like that which covered Grenfell Tower.

A report by independent watchdog the National Audit Office (NAO) has found that the Government plans have “lagged behind (their) own expectations” when it comes to stripping all buildings over 18m of their ACM.

Officials at the Ministry of Housing, Communities and Local Government (MHCLG) identified a total of 455 buildings over 18m tall covered in ACM like that which was on the west London tower block which set alight in 2017, killing 72 people.

In total, 155 of these buildings have had all of the ACM cladding removed, and 300 are still undergoing work – known as remediation – to be cleared of the material.

Removal work has not yet begun on 160 of these high-rises.

Buildings can be classed as undergoing remediation if the cladding has been removed, but not received a final sign off.

The NAO noted that work has been particularly slow on private sector buildings, of which only 14% of the 207 identified have had the cladding fully removed by May 2020.

This compared with 68.5% of the 54 student accommodation blocks and 48.7% of the 154 social housing buildings which had been fully remediated by the same point.

Gareth Davies, head of the NAO, said: “MHCLG has made progress in overseeing the removal of dangerous cladding from many buildings, particularly in the social housing sector.

“However, the pace of progress has lagged behind its own expectations, particularly in the private residential sector.

“It has a long way to go to make all high-rise buildings safe for residents.”

He added: “Going forward it is important that the department successfully manages the administrative challenges of funding building owners to carry out remediation work, particularly given its intention to commit a further £1 billion in full by the end of March 2021.”

In addition to the buildings covered in ACM, another 1,700 are thought to have cladding which could potentially be unsafe.

The flames which rapidly engulfed the 24-storey Grenfell Tower in June 2017 were fuelled by its ACM, which had a polyethylene core, the inquiry into the disaster has previously heard.

The cladding system had a heat combustion akin to diesel and close to lighter fluid, the hearing was told.

An MHCLG spokesman said: “We are clear that building owners must keep their residents safe and we are providing them with unprecedented support to do so.

“The Government has provided £1.6 billion to ensure unsafe ACM and non-ACM cladding is removed swiftly from high-rise buildings, and is bringing forward the biggest change in building safety in a generation.

“We have made progress with the removal and replacement of ACM cladding, but it is clear there is much more still to be done and building owners have a legal responsibility to ensure their building is safe.”