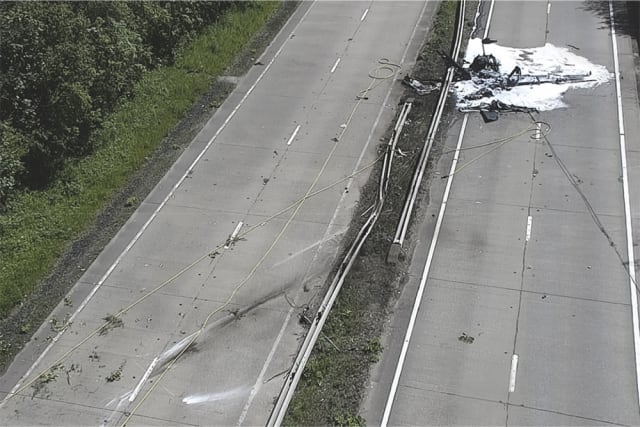 A light aircraft which crashed on to a dual carriageway suffered a loss of engine power, an investigation has found.

All three people on board were rescued from the burning wreckage on the A40 near Abergavenny, Monmouthshire, on May 12 last year.

A report by the Air Accidents Investigation Branch (AAIB) said the loss of power was probably caused by too much fuel being delivered to the cylinders of the plane during take-off from a nearby airfield.

It is not known why this happened.

Pilot Stuart Moore realised the engine was not delivering the expected power during take-off but decided there was “little option but to continue” as there was not enough runway left to safely abort, investigators said.

The lack of power meant the aircraft struck trees and a power line with its landing gear, causing it to crash on to the road.

It came to a rest upside down against the dual carriageway’s central barriers and caught fire.

Mr Moore and his two passengers – nephew Jack Moore and niece Billie Manley – were trapped due to the plane’s doors being jammed shut.

A passing motorist was able to break one of the windows before pulling the occupants out from the “fierce fire”.

They ran away from the wreckage narrowly before a “significant explosion” occurred.

All three on board were treated for minor injuries.