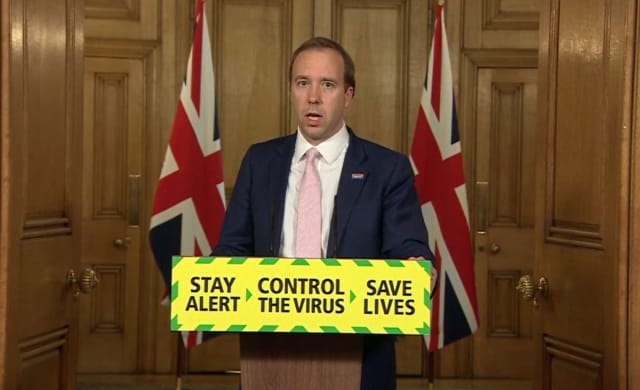 Health Secretary Matt Hancock has defended the Government’s decision to abandon developing its own contact tracing app, insisting that joining forces with Apple and Google will offer a new, improved design.

In a major U-turn, the app developed by the NHS’s digital arm NHSX will now be dropped, but Mr Hancock said some of its features will be incorporated into a new design with Apple and Google.

He told the daily Downing Street briefing developers had been working on both the NHSX app and the design offered by Apple and Google since May, but the NHSX app had hit a “technical barrier” during testing on the Isle of Wight.

The Health Secretary said: “We found that our app works well on Android devices but Apple software prevents iPhones being used effectively for contact tracing unless you are using Apple’s own technology.”

But Mr Hancock said that the NHSX app was better at measuring distance than the Google-Apple model.

“As it stands, our app won’t work because Apple won’t change their system, but it can measure distance,” he said.

“And their app can’t measure distance well enough to a standard that we are satisfied with.”

Mr Hancock said the solution was to work together to overcome the problems, adding: “We have agreed to join forces with Google and Apple to bring the best bits of both systems together.

“We will share our algorithm and the work that we have done on distance calculation and combine that with their work to deliver a new solution.”

No date has been set for the rollout of the app, despite the Health Secretary having previously said it would be available in mid-May.

He said: “We’re working on it. We’re not going to put a date on it I’m afraid because I’m absolutely determined that, whilst this technology can help, it’s got to be working effectively.”

Labour said the U-turn was “yet another example” of the Government’s response to the crisis being “slow and badly managed”.

Earlier, officials said the Government’s app was highly inaccurate when used on iPhones – only identifying around 4% of contacts – while the Apple-Google framework recorded 99% of all contacts.

But they acknowledged that significant issues remain with the Apple-Google technology, adding they hope an app will be ready by the autumn-winter flu season, a crucial point when many could exhibit coronavirus-like symptoms even if they do not have the disease.

Tory peer Baroness Dido Harding, who is leading the Government’s contact tracing programme, said none of the current apps were reliable enough to work.

She told the daily briefing: “This is a global challenge. What we have done in really rigorously testing both our own Covid-19 app and the Google-Apple version is demonstrating that none of them are working sufficiently well enough to actually be reliable to determine whether any of us should self-isolate for two weeks.

“That’s true across the world.”

She said the decision was taken in May to start building the Google-Apple version, and to test both.

“And actually the best way to get new technology going is to test different approaches,” she said.

The tech giants’ design enables more of people’s data to be kept private, which means the Government would have less access to figures on where coronavirus outbreaks are occurring.

Mr Hancock said the Government had “backed both horses” and will keep going until the right technology is developed.

In other developments, the Health Secretary set down the list for who will be vaccinated first if a successful vaccine is developed against Covid-19.

Frontline health and social care workers would be vaccinated first, followed by those aged 50 and over, the obese and people with some underlying conditions.

The Joint Committee on Vaccination and Immunisation (JCVI), which compiled the list, advises UK health departments on immunisation.

– The Bank of England left interest rates unchanged at 0.1%. It expanded its quantitative easing programme to boost the economy by another £100 billion to £745 billion.

– The Blackpool Illuminations will stay lit for an extra two months to boost tourism trade hit by the Covid-19 pandemic, now running until January 3.

– London Mayor Sadiq Khan has written to Prime Minister Boris Johnson urging him to make it mandatory for shoppers to wear face coverings.

– First Minister Nicola Sturgeon announced an easing of lockdown restrictions in Scotland, with people who live on their own or only with children under 18 able to form an “extended household group” from Friday.

– Schools in England are set to be given funding to hire private tutors from approved agencies to help pupils catch up, according to The Guardian.

Other figures on Friday showed that almost three-quarters of people who test positive for coronavirus and enter the NHS tracking system are now being manually traced.

Lady Harding praised the figures, but said: “We are missing some people who have symptoms who are not getting tested.”

Some 14,045 people who tested positive for Covid-19 in England had their case transferred to the Test and Trace contact tracing system during the first two weeks of its operation, according to the data.

Of these, 10,192 people (73%) were reached and asked to provide details of recent contacts.