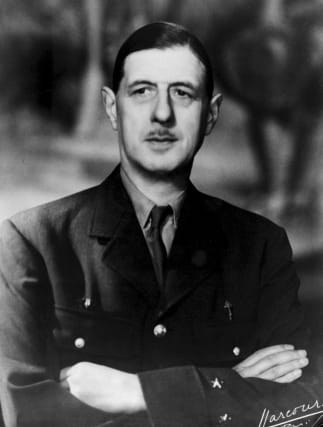 Charles de Gaulle's rallying cry to the people of France on June 18 1940 is thought to mark the foundation of French resistance to the German occupation.

After refusing to support an armistice with France's invaders and facing imminent arrest, de Gaulle fled to London – arriving the day before he made his famous speech.

Broadcast in French on the BBC, de Gaulle told his countrymen: "The generals who, for many years, have been at the head of the French armies, have formed a government.

"This government, claiming the defeat of our armies, has made contact with the enemy to halt the fighting."

The future president of France described how the country had been overwhelmed by Germany's blitzkrieg tactics and its seemingly "infinite" supply of tanks and fighter planes.

But he said: "Has the last word been said? Must all hope disappear? Is defeat definitive? No!

"Believe me, I am speaking to you with a full understanding of the facts and I tell you that nothing is lost for France."

"She has a vast empire behind her, she can form an alliance with the British Empire which holds the seas and continues the fight.

"She can, like England, call upon without limit the immense industry of the United States."

He continued: "This war is a world war. All the mistakes, all the delays, all the suffering do not prevent the fact there are, in the universe, all the means to one day crush our enemies.

Despite reaching only a small French audience at the time, the speech is considered one of the most important in all of France's history and a seminal moment in the Second World War.

Its significance is comparable to Sir Winston Churchill's "We shall fight on the beaches" speech delivered earlier that same month.