Breaking even in next 12 months will be a result, says salon owner 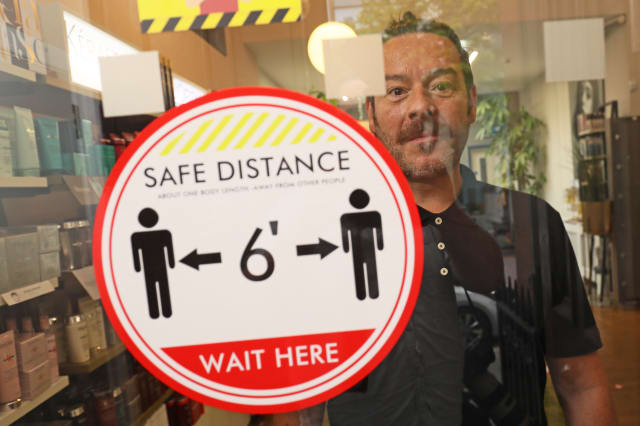 The owner of one of Belfast biggest hair salons has said he will be happy to break even for the 12 months after reopening.

Andrew Mulvenna said social distancing and hygiene precautions mean business will not be the same for some time.

He joined staff in his city centre salon on Thursday as they continued preparations for reopening.

“Like everybody it’s been a very crazy and emotional few months,” he said.

“Business is not going to be the same, that’s for sure, we’re hoping to just break even over the next six months to 12 months. I’d be happy with that, anything more than that is a bonus.

“But I’m a glass half full sort of person, so I think we just have to work around that and hopefully it will work, what we’ve put in place.”

Mr Mulvenna has halved the number of styling chairs in his salon, ensuring a 2.5 metre gap between them.

A one-way system has been introduced and staff will change into personal protective equipment (PPE) when they arrive at work, changing back into their own clothes when they go home.

Appointments will be staggered and employees will be asked to take a 10-minute “breathe and break” between clients, to allow for changing of PPE masks and cleaning of chairs.

“At the moment it’s about doing risk assessment in the salon, making sure everyone is safe in my team and also conveying that confidence in the clients as well, and making sure that when they come in they feel reassured about being as safe as possible,” said Mr Mulvenna.

He said he had been inundated with messages from clients eager to know when he will be open again.

“We haven’t opened our phones yet but there’s absolutely a huge amount of people and I spend most of my day answering emails and text messages,” he said.

The stylist said it was important that Stormont produced formal guidance and protocols for his industry.

“I don’t know all the answers but I’m trying to find as many answers as I can, so we hit the ground running,” he said.