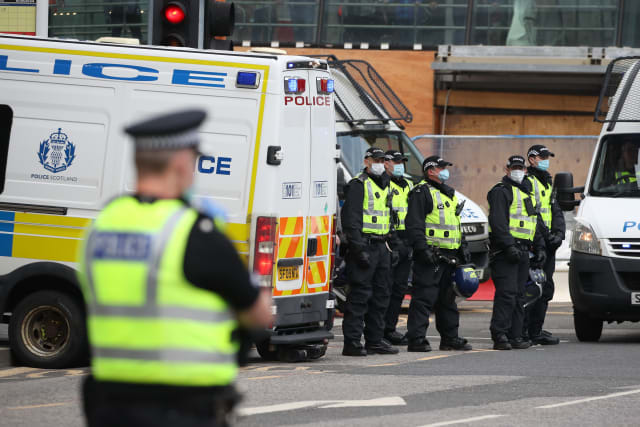 Nationalists, unionists, “statue wreckers and statue protectors” are as guilty as each other when it comes to protests during the coronavirus lockdown, the Scottish Police Federation has said.

The body, which represents rank-and-file officers, issued a statement after far-right loyalist protesters targeted a rally in Glasgow on Wednesday calling for improved living conditions for refugees.

Federation chairman David Hamilton said: “When our politicians fail to condemn the actions of those who defy the law, we cannot be surprised that it is increasingly difficult for police officers to enforce the law.

“The public cannot expect the police service to turn a blind eye to those who break the law in the name of a particular cause whilst demanding different treatment for opponents.”

He said events “over the weekends of June 6 and 13” – which saw Black Lives Matter protests and a gathering of people purporting to protect statues in Glasgow’s George Square – and Wednesday night’s disorder have “laid in tatters any suggestion that non-compliance with the coronavirus restrictions is a serious issue”.

He said it is unacceptable for groups to gather “under the guise of any particular cause” during the pandemic.

“At the same time as a family is unable to have more than 10 people mourn the death of a loved one, hundreds (and thousands) are able to gather with impunity and without criticism, simply by carrying a banner or a placard,” he said.

“There is no moral high ground to be claimed. Right or left; green or blue; unionist or nationalist; statue wrecker or statue protector, your side is as guilty as the other.”

He said there is no “hierarchy of culpability” and there are “too many opposing factions who need no excuse to use a protest as an opportunity to cause disorder”.

Mr Hamilton added: “Police officers should not be used as political pawns to advance or decry the actions of a particular group.

“The sooner our politicians decide what matters more, appeasement or the health of our nation, the sooner we can stop wasting valuable resources on the managing of illegal gatherings.”

In a separate joint statement condemning the disorder in George Square, Justice Secretary Humza Yousaf and Glasgow City Council leader Susan Aitken said they were appalled by the “shameful scenes of racist thuggery”.

Mass gatherings are currently unlawful and put lives at risk, the statement said.

While the politicians said they support “everyone’s right to protest”, they called on people to seek alternative means such as using social media.

Their statement read: “However, the racist and thuggish behaviour we witnessed last night was not peaceful protest, it was organised violence and disorder designed to intimidate.

“There is no moral equivalence between those demanding equality and better support and services for asylum seekers and those intent on violence, racism and disorder.

“Our police officers have been at the front line of keeping us safe during this pandemic, to then face disorder as we witnessed last night is simply unacceptable.

“We have spoken to Police Scotland this morning and we welcome their commitment to a robust and strong policing response in the coming days.

“The message is clear, if you are involved in violence, racism and disorder you will face the full force of the law.”