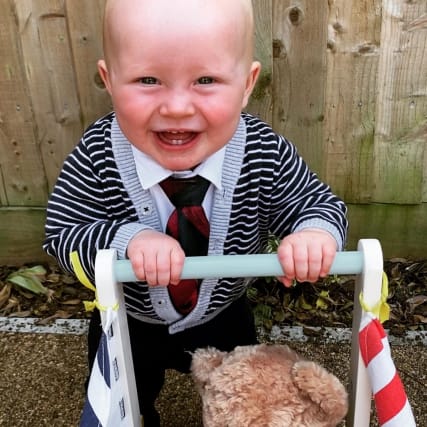 A toddler is raising money for the NHS by attempting to walk 100 lengths of his driveway by the time he turns one.

Little Teddy Kilbane has already raised more than £1,000 for NHS Charities Together.

His challenge was inspired by Captain Sir Tom Moore, who raised £32 million by walking 100 lengths of his garden before his 100th birthday.

Teddy, who lives in Portsmouth, has another 59 lengths left to walk before his first birthday on July 17.

He has done a lot of the challenge in fancy dress, including as a builder, a sailor and even as Sir Tom.

Both Teddy’s parents have been on the front line in the fight against coronavirus.

His mum Kiri, 33, is a GP, while his dad Liam is a Royal Navy doctor and a trainee orthopaedic surgeon.

He was seconded to Portsmouth’s Queen Alexandra Hospital intensive care unit at the height of the crisis.

Mr Kilbane told the PA news agency: “This all started because he had a little trolley walker thing, we were trying to get him to just toddle around and he was doing quite well on it.

“I just kept turning it every time he hit a wall so he just kept going from kitchen to living room and I was thinking ‘I wonder how far he can go’.

“We’ve got a shared driveway and it is a really nice flat surface so we went outside so see if he could do a length and he did it.

“I was very proud and I thought of Captain Tom’s challenge and thought ‘you’re one in 57 days, so if you do less than two laps a day we could probably get to 100 lengths before your birthday.”

He added: “We are trying to do a theme every day – although that is becoming tougher as we need more ideas of what to put him in.

“Some of them are distracting – we did a French one with garlic and onions and a french baguette and all he wanted to do was eat the bread which was quite funny.”

Teddy’s neighbours have been cheering him on.

“It has been good fun, our neighbours all sort of poke their heads out as well which is quite nice,” Mr Kilbane said.

“He tends to wave at the cars and wave at the windows even if there is no one there – he just gets distracted and wants to wave so you have to refocus him.”

Teddy is currently doing between two and five lengths a day.

“Hopefully in another month he might be able to do a bit of it without the trolley,” Mr Kilbane said.

“He’s pretty stable with the walker but he’s a bit of a scaredy cat, even trying to make him walk holding one hand he just says no, he’s still working on his confidence.”

Teddy’s JustGiving fundraising page can be found at https://www.justgiving.com/fundraising/ToddlerTeddy