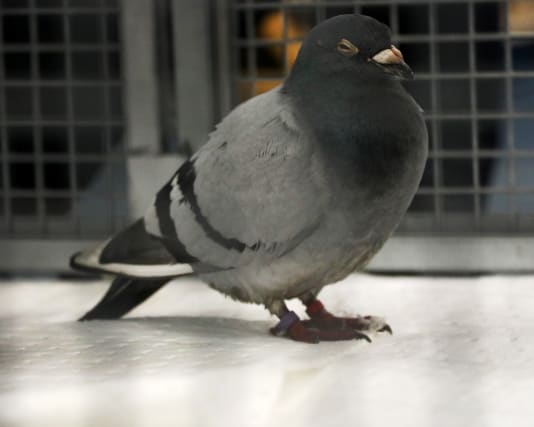 The flight crew of the HMS Queen Elizabeth aircraft carrier have been coping with a different set of wings – a stowaway racing pigeon.

The confused and exhausted bird, nicknamed Pauley aka Turbo P, was found nesting in the hangar of the 65,000-tonne warship which is currently carrying out flight trials with F-35 Lightning jets off East Anglia.

The pigeon was discovered as the crew were stowing the stealth jets from 617 “Dambusters” Squadron, based at RAF Marham, after a day of tests.

Air Engineering Technician Alexander Thomason said: “I was just putting the lashings on the jet when I looked up and saw this pigeon nestled behind the hangar gantry.

“It appeared pretty pleased to be there, if I’m honest. We’ve named her Pauley.”

The sailors managed to catch the bird and are now looking for a safe place for it to live on board.

Lieutenant Commander Jerome Pethrick, in charge of aircraft maintenance, said: “I know the hangar team would love to let the pigeon fly around all day but sadly for them it’s just not safe. We have to find somewhere without jet engines.”

HMS Queen Elizabeth is expected to return to its Portsmouth base at the end of June on completion of the flight trials which are preparing it for its first carrier strike group deployment next year.