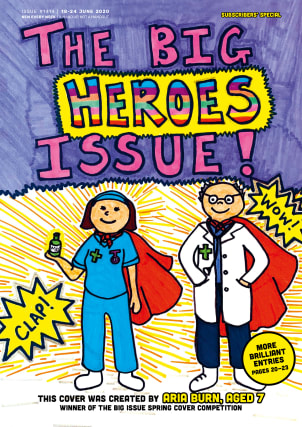 A picture of a doctor and a nurse drawn by a seven-year-old has won a competition for a heroes-themed front page of The Big Issue.

The picture will feature on the cover of the latest edition of the magazine, which is on sale from Thursday.

Aria said: “I was thinking about the doctors and nurses being like superheroes and the rainbow letters were because of the NHS. My mummy works in medicine – she helps make the medicine so she is also a big hero.”

Aria said lockdown has not been too bad, adding: “I get to play with my sister all day but we’re looking forward to everything getting back to normal.”

The Big Issue editor Paul McNamee said: “The competition started as our way of helping parents and their children cope with the early days of lockdown.

“We knew that the vision and talent of the nation’s kids would lift spirits. What we didn’t realise was how much of a snapshot of the nation this would provide, how and where and what was being done in this incredible time.”

The magazine collaborated with book company Puffin to ask for entries from youngsters around the theme Heroes.

Children’s illustrator Dapo Adeola, who headed the judging panel, said of the winner: “Of all the entries, this one really shows a great sense of composition and it manages to say what it’s saying in a simple, fun and bright way.

“Everything from the character designs to the choice of colours used show careful thought. The sense of design on display here speaks to a promising future in illustration.”