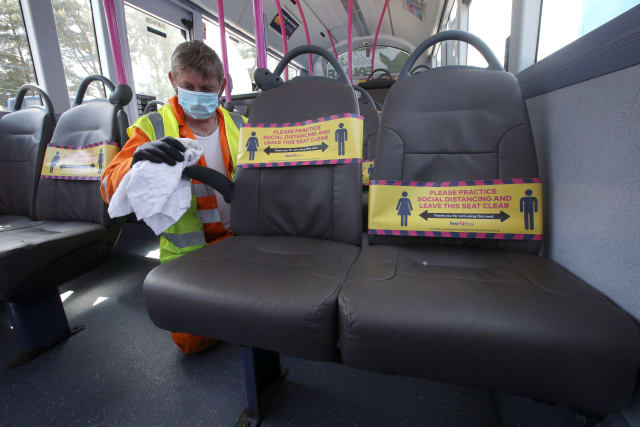 Changing the two-metre social distancing rule to one metre would only boost bus capacity by one passenger per vehicle, a metro mayor has warned.

West of England mayor Tim Bowles said major reform of bus funding is required as operators are unable to meet demand on some routes.

He told the Commons’ Transport Select Committee: “First Bus have done work and trials on that.

“They did modelling on two-metre distancing, one-and-a-half-metre and one metre.

“If you think about how tight buses are, even if you reduce that to one metre they’ve worked out you will get one additional passenger on a bus.

“If you’re around about 25% capacity on the bus, it means a double decker can really only accommodate around 20 or just over 20 people.

“We would only see one more on one of those routes, if they’re following the rules.”

Mr Bowles told the committee that demand for bus services has increased in recent days.

The mayor said: “We have got a very good relationship with our bus operators.

“They are running duplicate buses on many routes, but on those key routes they are still finding that we are at capacity already in spite of these limited returns, due to social distancing.”

“We are the people who know what routes need supporting and we can act at pace, and we can be flexible, as opposed to directly paying operators to continue delivering in the old manner and in the old normal,” he said.

“We’ve got to start using this as an opportunity to change the way we work.”