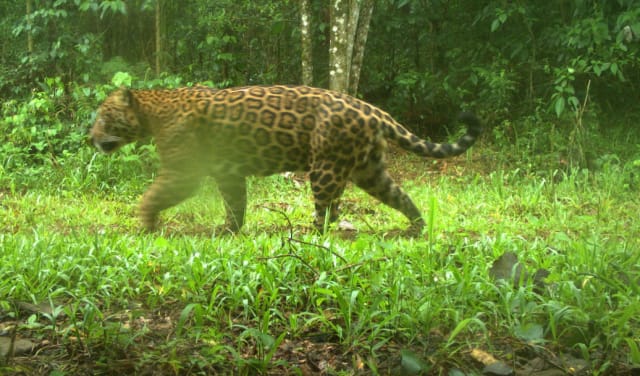 Jaguar numbers may have doubled in 15 years in the south-western part of South America’s Atlantic Forest, monitoring by conservationists has found.

Research using camera traps at more than 200 sites, which took more than 440,000 photographs last year alone, shows a slow recovery in numbers since initial studies in 2005.

The big cat is threatened by loss of habitat to farming and development, as well as illegal hunting of its prey and conflict with farmers, in the Atlantic Forest, which spans Argentina, Brazil and Paraguay.

Efforts across the three countries by WWF, Fundacion Vida Silvestre Argentina and local partners are focusing on habitat loss, poaching of jaguars and their prey, and reducing conflict between the big cats and local people.

The regular monitoring by researchers based at institutes in Brazil and Argentina found that in 2005 there was an estimated population in the south-western region of the Atlantic Forest of 30 to 54 individuals.

The figures mean the population across the whole of the Atlantic Forest is estimated at between 150 and 200, WWF said.

Karina Berg, regional manager for Latin America at WWF-UK, said: “These new figures demonstrate the importance of investment into long-term conservation efforts and are an incredible testament to the commitment and dedication of our teams and partners on the ground.

“Conserving and protecting this area and its wildlife remain as important as ever, and while jaguar populations increase, the challenges faced by this species continue.

“We hope to see continued population increases here and in other critical regions across Latin America in the future.”

Manuel Jaramillo, general director of Fundacion Vida Silvestre Argentina, said: “Considering the monitoring work carried out from 2005 to date, we see a favourable trend for the species.”

Conservationists will push harder to achieve a population of 250 jaguars in Misiones province in Argentina and take the species out of the risk of extinction, he said.