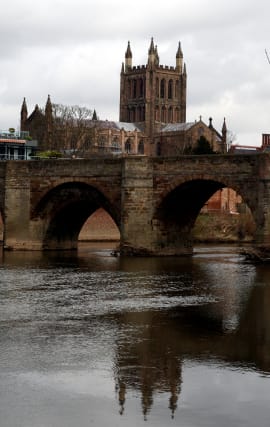 Hereford, Wigan and Rochdale are leading a bounce back in buyer demand following the reopening of England’s housing market, analysis has found.

Across England generally, buyer demand was up by nearly a third (32%).

The housing market in England started to reopen from May 13, with serious buyers now able to undertake physical viewings once more.

Nine out of the top 10 places with the strongest increases in demand have average asking prices lower than the current average for England of £337,884.

The only exception is Wilmslow, where the average home is priced at £461,535.

Situated on the River Wye, the cathedral city of Hereford topped the list, with demand surging by 77% when comparing the first two weeks of March with the same period this month.

It was followed by the North West towns of Wigan, with a 71% uplift, and Rochdale, with a 66% increase.

A separate study by Rightmove of the prices of more than 7,000 newly-agreed sales, provided to it by major property groups, found that homes with three or four bedrooms homes, excluding four-bedroom detached properties, are achieving closest to the last advertised asking price.

These properties are typically favoured by people who are trying to take their second step on the property ladder, having previously been first-time buyers, with 98% of the asking price achieved typically.

Rightmove’s property expert Miles Shipside said: “Many of the towns in the list have cheaper prices so a buyer’s budget goes further, allowing extra space for possible home-working and gardens for private relaxation.

“Our new analysis of the prices that buyers are agreeing to pay shows that properties in the typical family home or second-stepper sector are achieving closest to their asking prices.

“These are currently appealing because they’re likely to benefit from more space and a private garden, attributes that home movers tell us are now even more important than before lockdown.”

Here are the towns and cities with the biggest percentage increases in buyer demand comparing the increase from March 1 to 14 to June 1 to 14, followed by the average asking price in June, according to Rightmove: