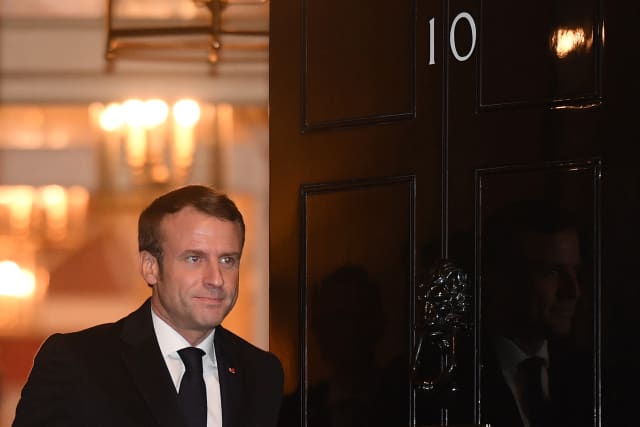 The French president is visiting London on Thursday to commemorate the 80th anniversary of his predecessor Charles de Gaulle’s “Appel” – his BBC broadcast to occupied France following the Nazi invasion in 1940.

Mr Macron will be received by the Prince of Wales and Duchess of Cornwall at Clarence House, before a ceremonial event and then bilateral talks in Number 10.

Mr Johnson said the four surviving “Compagnons” of the Order of Liberation – Edgard Tupet-Thome, 100, Daniel Bouyjou-Cordier, 99, Hubert Germain, 99, and Pierre Simonet, 98 – will receive honorary MBEs in tribute to their “courage and sacrifice in defending us and the whole world from fascism”.

The awards will be presented at a ceremony in France in the coming months.

The leaders will hold bilateral talks to discuss the coronavirus crisis and other issues. Mr Johnson said on Tuesday that he would raise travel between the UK and France at the meeting.

They will also watch a flypast of the Red Arrows and their French equivalent, La Patrouille de France, to mark the anniversary of the Appel.

Mr Johnson said: “Eighty years ago Charles de Gaulle, the leader of the French Resistance, arrived in London knowing that the values of freedom, tolerance and democracy that Britain and France shared were under threat.

“He pledged that we would stand together to defend those values and protect our citizens from those bent on destroying us.

“The four men we are honouring today – Pierre, Edgard, Daniel and Hubert – symbolise the enduring depth and strength of the friendship between our two countries.

“They are heroes, and I am immensely proud that as a nation we are paying tribute to their courage and sacrifice in defending us and the whole world from fascism.

“The struggles we face today are different to those we confronted together 80 years ago. But I have no doubt that – working side by side – the UK and France will continue to rise to every new challenge and seize every opportunity that lies ahead.”

Defence Secretary Ben Wallace said: “The UK Armed Forces are honoured to welcome President Macron to London on this momentous anniversary for our closest European ally.

“The President’s visit is an important opportunity to remember our shared sacrifices and achievements in defeating fascism.

“We can look back on more than a century of co-operation between our Armed Forces and feel proud of what our countries have achieved, side by side at so many great turning points in history.

“The UK and France continue that close partnership today, working together from the Caribbean to Africa and the Middle East, as guarantors of peace and security.”