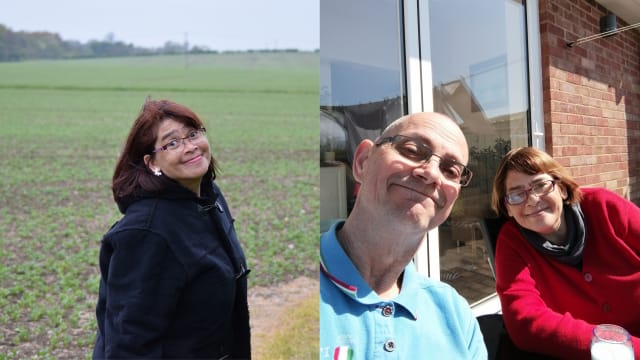 A woman who feared she would die with coronavirus was reunited with her husband on her 55th birthday after being placed on a trial involving a widely used steroid hailed as a Covid-19 treatment breakthrough.

Katherine Millbank, 55, from Buckinghamshire, was rushed into intensive care at Stoke Mandeville Hospital on March 26, and was placed in an induced coma and put on a ventilator.

She told the PA news agency: “When I was in ICU, I remember thinking, ‘I don’t know what’s happening but I don’t think I’m going to come through this. I’m going to die’.”

On April 3, the doctors called her husband Paul, 55, and asked if he would give permission for her to be included on a trial for dexamethasone, and days later he was told she had “turned a corner”.

Mrs Millbank said she felt “lucky” to have been included on the clinical trial, which she credits with saving her life.

Researchers have found that the drug reduces deaths by up to a third among patients on ventilators and by a fifth for those on oxygen.

It has been approved to treat all UK Covid-19 patients who have been admitted to hospital and are on ventilators or oxygen.

Mrs Millbank said: “The research team have been amazing, because not everybody got that drug, so I was one of the lucky ones.

“Then I remember coming out of the ICU and everyone was clapping, and I remember waving at people thinking, ‘why are they waving at me?'”

After she was taken out of ICU, staff helped her make a video call with her husband. She said: “That was very emotional and the thought just stuck in my head that this is my husband and he is waiting for me to come home.”

Mr Millbank said he had “no issue” with his wife being given the trial drugs.

He told PA: “We are all up for supporting the medical fraternity and medicine in general. I didn’t even have to think about it, really.

“They are already tried and tested drugs anyway, all of them, and none of them has got any serious side effects, to my knowledge anyway. It was a no-brainer because, at the end of the day, I wanted my wife back.”

Mr Millbank had already been told by doctors that his wife’s chances of recovery were “50-50” and he was willing to do anything to help her get better.

Despite being told he would have to wait another two weeks before she was well enough to return home, she began to improve faster than expected and he picked her up from the hospital on the evening of her birthday.

He said: “I was sceptical at first. I got numerous text messages from Katherine and not all of them made sense, but then they called me and said I could go pick her up. It just felt so surreal.

“We started to drive home and it was like, just pinch me, is this really happening? Am I really bringing my wife home after all this emotion and all this trauma? It didn’t really hit home until we got home.”

Mrs Millbank added: “I just kept looking around and trying to listen to the birds and talk to my husband a bit. I remember thinking, is this really happening? Because when I was in hospital I was having hallucinations and it all felt a bit surreal.

“Most of the time you listen to the news at the moment and it is sad news. But the research team have found something that’s really helped a lot of people and it’s just absolutely fantastic. It should give people hope.”

Scientists estimate that if they had known what they now know about dexamethasone at the start of the pandemic, 4,000 to 5,000 lives could have been saved in the UK.