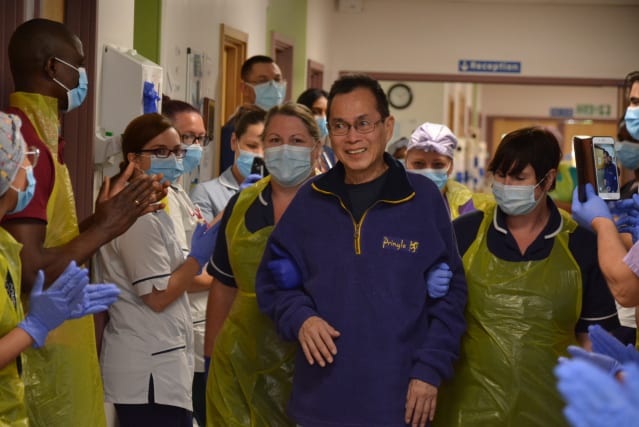 An NHS nurse who spent 75 days as a coronavirus patient at the hospital where he works has recovered and walked out of the ward to clapping from colleagues.

Felix Khor, 68, spent 45 days in the intensive care ward at Southend Hospital where he has worked for 15 years, and was on a ventilator.

He then spent several weeks on a different ward.

He was admitted to hospital in early April at the height of lockdown and was discharged on Monday.

Up to 200 NHS staff lined the hospital’s main corridor to clap for him as he was wheeled out of intensive care last month.

Mr Khor was told that somebody on a ventilator for two weeks loses 40% of their muscle, so he was determined to walk again.

And he did so on Monday, to claps from staff on his ward, as he recovered and left the hospital.

Mr Khor, who lives in Shoebury, joined Southend Hospital in 2005 as part of the resuscitation training team.

He continued working at the hospital following his retirement as part of the staff bank in the emergency department.

Recalling the moment he was clapped out of intensive care, Mr Khor said: “There were consultants, doctors, matrons, nurses, domestics; every uniform you could think of.

“I never realised that so many people cared about me.

“It was amazing to have been in lots of people’s prayers and thoughts; it has been a huge morale boost.

“Waking up and everyone knowing your name has been a little bit surreal, but I thank everyone for their kind thoughts.

“Staff have been so caring, supporting and encouraging.

“I keep saying to people that, honestly, words cannot express enough my gratitude to the care I have been given.”

He plans to retire after recovering from Covid-19 and is looking forward to gardening.

“I know half of my plants will be dead, but I’ll start again, I love my gardening,” he said.

“This year has just been my missing summer, but like me, my garden will flourish once again.”