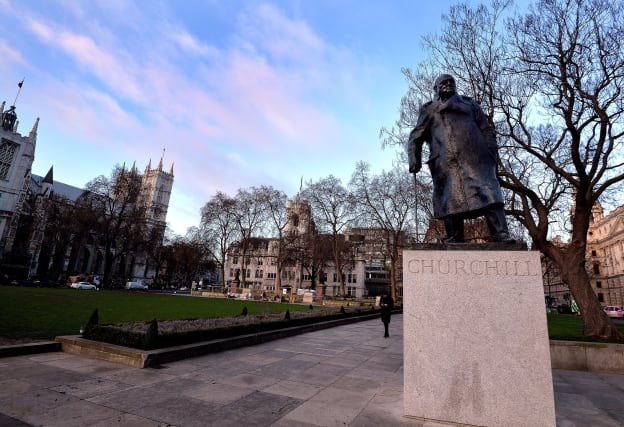 The cleaned-up statue of Sir Winston Churchill has been uncovered in London’s Parliament Square in time for the visit of French President Emmanuel Macron.

It was boxed off after being daubed with graffiti, accusing the former PM of being a racist, during a Black Lives Matter (BLM) protest.

Nearby central London statues of leaders Nelson Mandela and Mahatma Gandhi, plus the Cenotaph, were also boarded up, but Culture Secretary Oliver Dowden said it “would not be a great look” for the Churchill statue to be covered during Mr Macron’s visit.

The BLM protest was triggered by the death of unarmed black man George Floyd at the hands of police in the US in May.

It was followed by violent scenes last weekend when far-right demonstrators clashed with officers near the Palace of Westminster and Trafalgar Square.

A spokesman for London Mayor Sadiq Khan said the boards around the former PM’s statue would be removed for the visit but that those around the Mandela and Gandhi statues would stay in place “under review”.

The boards around the Cenotaph were taken down on Monday night, English Heritage said.

Mr Macron’s visit on Thursday marks the 80th anniversary of General Charles de Gaulle’s appeal to the French population to resist the German occupation of France during the Second World War.

His rallying call was broadcast on the BBC in June 1940, when he said: “I call upon all Frenchmen who want to remain free to listen to my voice and follow me.”

Mr Macron will be welcomed to London with a ceremonial Guard of Honour from The Coldstream Guards at Clarence House and a flypast by the RAF’s Red Arrows alongside their French counterparts, La Patrouille de France.

Mr Khan said the decision to protect the statues in Parliament Square was a “wise” precaution, fearing they could become a “flashpoint for violence” involving extreme far-right protesters.

Home Secretary Priti Patel told the Daily Mail: “We should free Churchill, a hero of our nation, who fought against fascism and racism in this country and Europe.”

Prime Minister Boris Johnson used an article in the Daily Telegraph to defend Sir Winston’s record against claims of racism and to warn against attempts to “photoshop” Britain’s cultural landscape.