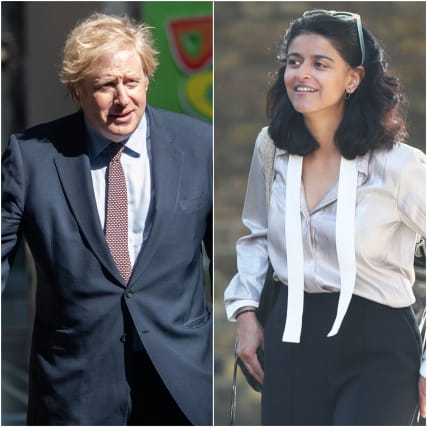 Boris Johnson is a “huge admirer” of a Downing Street aide who questioned the existence of institutional racism and hit out at a “culture of grievance” among anti-racism campaigners.

The Prime Minister labelled Munira Mirza a “brilliant thinker about these issues” when asked if he agreed with her “culture of grievance” remark.

Ms Mirza, the head of the No 10 policy unit, is playing a major role in setting up the PM’s commission on racial disparity.

Speaking at Prime Minister’s Questions, SNP MP Martin Docherty-Hughes (West Dunbartonshire) said her appointment was greeted with “disbelief” by some.

He added: “Can the Prime Minister tell us today does he agree with Ms Mirza that previous inquiries have fostered a culture of grievance within minority communities?”

Mr Johnson replied: “I am a huge admirer of Dr Munira Mirza, who is a brilliant thinker about these issues, and we are certainly going to proceed with a new cross-governmental commission to look at racism and discrimination.

“It will be a very thorough piece of work looking at discrimination in health, in education, in the criminal justice system.

“I know the House will say we’ve already had plenty of commissions and plenty of work, but it is clear from the Black Lives Matter march and all representations that we’ve had that more work needs to be done.

“And this Government is going to do.”

The PM announced the Commission on Race and Ethnic Disparities after a series of anti-racism protests on British streets triggered by the death in the US of George Floyd while in police custody.

Ms Mirza, who served as one of Mr Johnson’s deputy mayors while he ran London, used an article on the Spiked website to criticise a review carried out by David Lammy in September 2017, which examined the treatment of Black, Asian and Minority Ethnic (BAME) people in the criminal justice system.

She said Mr Lammy implied that BAME people did not trust the justice system because of “institutional bias and discrimination”.

Ms Mirza wrote: “Certainly there is a historic legacy here from previous decades, but it is equally possible that the current accusations of institutional racism by lobbyists and activists, a perception more than a reality, is behind the further corrosion of public trust.”

In a Sun article that month, she also said: “By appeasing the anti-racism lobby and affirming its culture of grievance, public institutions and business leaders are not making Britain a fairer place but harming the very people they aspire to help.”