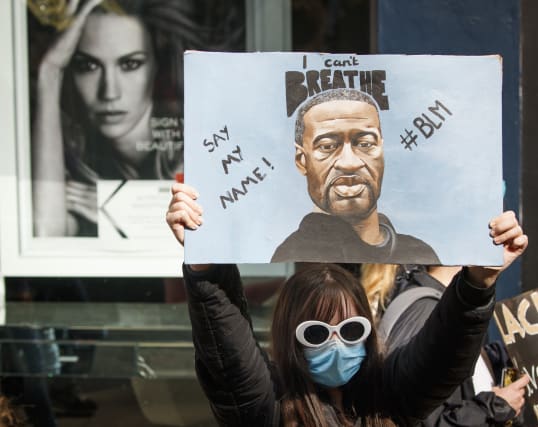 A never-seen-before global unity against police brutality has been sparked by the death of George Floyd at the hands of an officer, his brother has said.

Unarmed black American Mr Floyd, 46, was filmed gasping that he could not breathe while pinned by the neck under the knee of a white police officer as he died in Minneapolis on May 25.

His brother Philonise Floyd, and family lawyer Benjamin Crump, said his death – which has sparked outrage across the world – highlights a need for police reform.

Mr Floyd told ITV News: “As time goes by, you realise that he is changing people’s lives, not just our lives but other people’s lives around the world, his death has sparked unity right now and that’s something this world has never had.”

Mr Crump said: “There are two justice systems in America, one for black America and one for white America, but we need equal justice for the United States of America”.

Despite the coronavirus pandemic ruling out large public gatherings, huge protests have been held in the US and globally since Mr Floyd’s death.

They have included people of different races calling for justice and marching against brutality under the banner of Black Lives Matter.

Mr Crump told the programme: “We believe this is the best time we have ever seen in the wake and aftermath of the killing of his brother, that will get this change which will prevent people and particularly black people from being killed by police unjustifiably.”

He was speaking after another black man, Rayshard Brooks, was gunned down while fleeing two police officers following a struggle with them in a restaurant car park in Atlanta late last week.

The local medical examiner declared his death a homicide on Sunday.

It came during a second weekend of violent clashes in London as far-right protesters took over areas near the Houses of Parliament and Trafalgar Square on Saturday in response to anti-racism demonstrations sparked by Mr Floyd’s death.