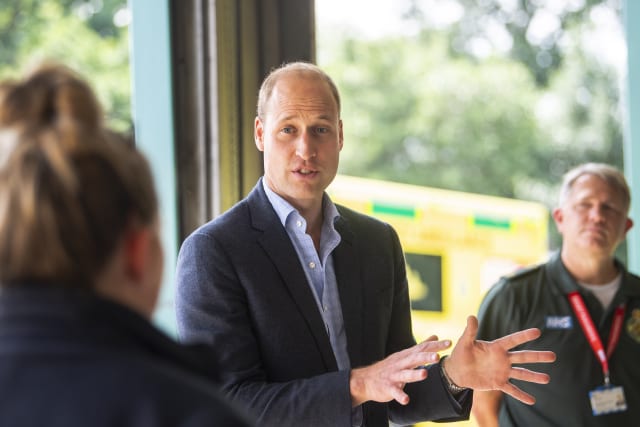 The Duke of Cambridge has joked that he is looking forward to having a pint in the pub, as he praised ambulance staff for “all your hard work”.

William visited crews from King’s Lynn Ambulance Station at the Queen Elizabeth Hospital to learn how they have been coping during the pandemic – his first face-to-face meeting with the public in months.

The duke paid tribute to the NHS as a whole, when he spoke about the weekly applause for health and care workers that recently came to an end.

He said: “Was Clap for Carers a big deal for you? It was powerful wasn’t it?

“We are very busy and when everyone stops and finds a way to acknowledge, very publicly and very visibly, what the service does (that’s) very important.

“Everyone appreciates the NHS, we have an amazing system, it’s a great health service and many countries around the world envy what we have.

“It’s not until you have a big crisis, a pandemic, and everyone realises we have to really make sure we value and we show our appreciation.”

In a lighter moment the duke joked: “I look forward to messages when we can drink more and go out to the local pub and have a pint.”

He also joked: “I’m worried about the waistline of the nation as well, with all the chocolate and cakes. I’ve done a lot of baking at home. Chocolate goes down very well.”

The duke was told staff had enough masks and other items during the Covid-19 outbreak, but the personal protection equipment was a “barrier” to treating terrified patients – although they found a way to cope

William is likely to know the Queen Elizabeth Hospital in King’s Lynn, Norfolk, as he worked as a helicopter pilot for the East Anglian Air Ambulance charity.

Some paramedics at King’s Lynn, which is close to William’s Norfolk home, Anmer Hall, had been away from their families for three months to keep them safe, and he thanked them for their “sacrifices”.

His visit followed others by members of the royal family who earlier on Tuesday had also carried out their first public engagements.

The Prince of Wales met NHS staff and key workers at a Gloucestershire hospital and the Princess Royal visited a military barracks to chat to service personnel.