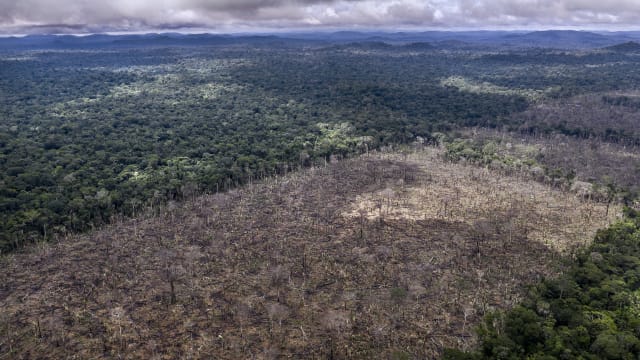 The UK will be “complicit” in increasing the risk of future pandemics if post-Brexit trade deals do not protect nature and support sustainable farming, WWF warned.

A new report from the conservation charity said the destruction of forests and other natural habitats and intensive farming are creating perfect conditions for another pandemic to emerge.

Covid-19 and other recent epidemics such as HIV, Sars and Ebola are “zoonotic” diseases which can be traced back to viruses that leap from animals to people, and the risk of wildlife and humans coming into contact with each other is on the rise, WWF warned.

Unsustainable food systems are driving large-scale conversion of land from forests and savanna to agriculture, in particular to meet increased demand for meat and dairy, the report said.

This encroachment is putting pressure on natural resources and bringing people, livestock and wildlife closer together, pushing up the chance of diseases moving from wild animals to humans.

The modern globalised world means an increasing probability new diseases can become devastating pandemics such as Covid-19, with serious impacts on health, livelihoods, the economy and food security, the report said.

In the UK, concerns have been raised that post-Brexit trade deals could allow the import of food produced with lower welfare or environmental standards than allowed here, and undercut British farmers.

WWF said UK efforts to strike new agreements with countries risked not only driving down food and environmental standards of imported products, but also being complicit in future pandemics unless the trade deals help reverse habitat destruction and ensure a move to sustainable farming globally.

The charity is calling on International Trade Secretary Liz Truss and Environment Secretary George Eustice to enshrine in law requirements that imports to the UK meet the highest standards, including efforts to make sure products and supply chains are not driving habitat destruction overseas.

Tanya Steele, chief executive at WWF-UK, said:  “We cannot be complicit in increasing the risk of the next pandemic.

“We need strong legislation and trade deals that stop us importing food that is the result of rampant deforestation or whose production ignores poor welfare and environmental standards in producer countries.

“The Government has a golden opportunity to make transformative, world-leading change happen and ensure a green and just recovery.”

“We need to work at every level with nature, not against it, to prevent another global health crisis,” she urged.

At the international level, the Covid-19: Urgent Call to Protect People and Nature report is calling for governments to commit to a “new deal for nature and people” that halts and reverses the loss of nature.

WWF is also calling for an end to land conversion, deforestation and habitat fragmentation, while sustainably feeding a growing global population, as well as a halt to the high-risk illegal wildlife trade and more enforcement to prevent wildlife trafficking.