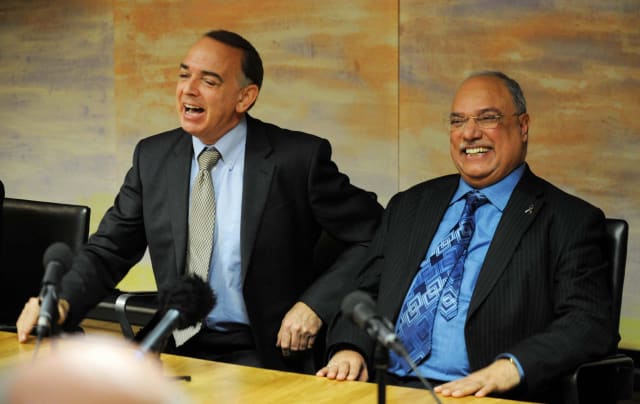 A Welsh Conservative politician has died after being taken ill, his party has said.

Mohammad Asghar, 74, was the first ethnic minority member of the Senedd when he was elected in 2007 while it was known as the Welsh Assembly.

The MS for South Wales East was taken to hospital on Tuesday morning following a medical emergency.

A Welsh Ambulance Service spokesman said: “We were called to reports of a medical emergency at an address in Newport on Tuesday, June 16, at approximately 11.19am.

“We sent two rapid response cars and two emergency ambulances to the scene where we were assisted by colleagues from Gwent Police.”

His daughter, Natasha Asghar – a presenter for the QVC shopping channel, said on Twitter: “Today by far has been the worst day of my life. I lost the first man I ever loved forever.

“The man who taught me to walk, crack terrible jokes, do whatever I had to to achieve my goals and do anything for ones family. I cannot imagine life without you. I Love you.”

The Secretary of State for Wales, Simon Hart, described Mr Asghar as a “significant figure in Welsh politics”.

He said: “As both Wales’ first Muslim councillor and first ethnic minority member of the Senedd, Mohammad Asghar was an extremely significant figure in Welsh politics and has contributed so much to his community and the country since settling here as a young man.

“His loss is terrible news. He will be fondly remembered and I would like to pay my condolences to Mohammad’s family, friends and constituents.”

The Welsh Conservative’s leader in the Senedd, Paul Davies, said in a statement: “This news is a devastating blow to the Conservative Group in the Welsh Parliament.

“Our friend and colleague, Mohammad Asghar – known to many as ‘Oscar’ – has served the people of South Wales East in the Senedd with distinction for more than 13 years.

“Proud to be British and Welsh and proud of his roots, Oscar had friends from across the political spectrum, and made his mark on Welsh history as the first-ever BAME Member of the Senedd.

“I am sure that everyone will join me in sending condolences to his family ,especially his wife Firdaus and his daughter Natasha, both of whom he loved dearly, at their tragic time of loss.”

“He will be fondly missed by his family, friends and colleagues.”

Mr Asghar was previously a member of Plaid Cymru before he defected to the Tories in 2009, becoming the first member of the Senedd to leave one party to join another.

Plaid Cymru leader, Adam Price, said: “On behalf of myself and Plaid Cymru I send sincere condolences to the family and friends of Mohammad Asghar. We remember Oscar for his dedication to the people of South Wales East and his long service in the Senedd.”

Wales’ education minister, Kirsty Williams, said: “So very sorry to learn of the passing of Mohammad Asghar MS. Deepest sympathy to his family, friends and Welsh Conservative colleagues at the Senedd.”

Mr Asghar was born in Peshawar, Pakistan, and moved to London as an adult to complete a Master of Business Administration qualification before settling in Newport, South Wales, and working as an accountant.

In 2004, he became Wales’ first Muslim councillor, representing the Victoria Ward in Newport.