References to Edward Colston covered up and removed from Bristol Cathedral 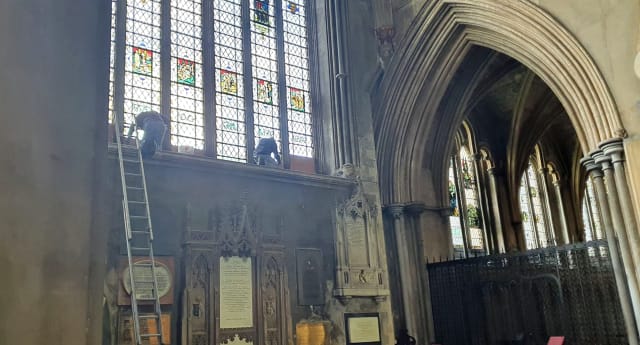 Dedications to slave trader Edward Colston have been removed or covered up from Bristol Cathedral and another prominent church in the city.

Work was carried out on Monday to cover up parts of the cathedral’s large Colston Window, dedicated to the 17th century merchant, that will later be removed.

Panes from a window at St Mary Redcliffe Church were also taken out on Monday, with other references to Colston also covered up at the sites.

The Diocese of Bristol described the toppling of the Colston statue during a Black Lives Matter march on June 7 as a “symbolic moment” and “signal for change”.

“The dedications to Colston, in two significant places of worship, has prevented many people from finding peace in these beautiful buildings,” it said in a statement.

“Most of these dedications have now gone and the rest will follow,

“The removal or covering of window panes is also a symbolic moment.

“We must not let it distract us from the work that needs to be done.”

The diocese said it hoped that removing or covering up references to Colston demonstrated its “renewed sense of urgency to address these issues”.

Discussions and work around the transatlantic slave trade, racism, identify and justice will continue at Bristol Cathedral, St Mary Redcliffe Church and the Church of England in Bristol, it added.

“We will complete an inventory of all our churches to identify and understand references to slavery,” the diocese said.

“We will engage with black Christians, theologians, historians and all members of the community as we listen, learn and explore these important issues and agree the right course of action.

“The removal of historical items is a complex subject that evokes strong feeling.

“We want to work with others to address the true cost of our history, heal our divisions and build a unified city of hope that values and cares for everyone.”

The diocese will be take part in a commission due to consider Bristol’s past and share its stories.

It was then dragged to the harbourside, where it was thrown into the water at Pero’s Bridge – named in honour of enslaved man Pero Jones who lived and died in the city.

Since the removal of the statue, music venue Colston Hall and high-rise building Colston Tower have both removed lettering from their facades.

Both Colston’s Girls’ School and the separate Colston’s School are considering a name change.