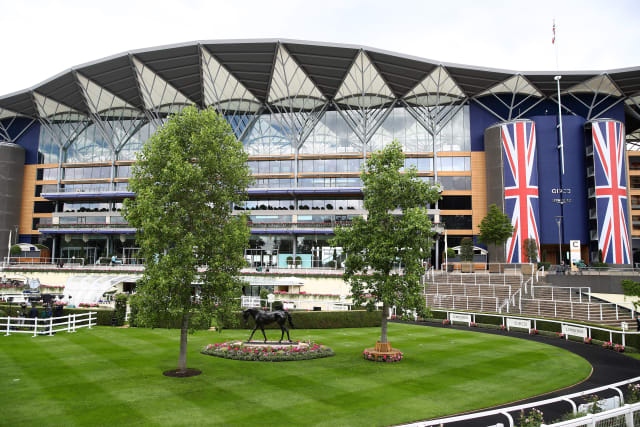 The Queen has paid tribute to the “valiant” efforts of those involved in working to make this year’s Royal Ascot, which is being held behind closed doors, a success.

The monarch will be absent from the renowned annual race for the first time in her 68-year reign as it gets under way without the usual thousands-strong crowd.

Acknowledging the “challenging times” and the “different” feeling for those who usually enjoy gathering together at the race meeting, the Queen said she was sure it would remain a “highlight of the racing calendar”.

More than 300,000 guests, dressed in their finery, usually gather for the five-day sporting and social highlight in Berkshire which begins on Tuesday.

But this year there will be no monarch, no royal carriage procession, no trophy presentations and no spectators amid strict Government guidelines brought in when racing resumed at the start of the month.

In her annual message, which forms the introduction to the racecards, the Queen said: “I send my best wishes to the thousands of racing professionals and enthusiasts who will join me in celebrating this year’s Royal Ascot.

“In these challenging times, we are once again delighted to welcome the best horses and jockeys from across the world and pay tribute to those who have helped make this race meeting possible.

“This year Ascot will feel different for many, as it is so often a chance for friends, families and colleagues to gather together and enjoy a shared passion.

“I am sure however, that with the valiant efforts of the organisers, owners, trainers and stable staff, it will remain one of Britain’s finest sporting occasions and a highlight of the racing calendar.

“To everyone attending Royal Ascot, in person or virtually, I hope you have a most enjoyable and unique week of racing.”

At Windsor Castle, the Queen, 94, will be watching the coverage on television, not least of all because she has a number of runners.

First Receiver, ridden by Frankie Dettori in the Queen’s racing colours, will feature in the 1.50 Ascot Hampton Court Stakes on Wednesday.

The colt secured the Queen a win on the anniversary of her coronation at Kempton on June 2.

Later on Wednesday, the Queen also has Tactical riding in the 4.10 Ascot Windsor Castle Stakes.

She is also hoping her horse Punctuation will run in the 4.10 Ascot Queen’s Vase on Friday.

As an owner, the monarch will have access to a virtual Royal Ascot parade ring to be able to view her horses from the safety of Windsor where she has been staying for the past 13 weeks during the pandemic.

The new online Racing Hub has been set up in light of the restrictions this year, and features real time weather data and a live 360 degree parade ring camera feed.

Nick Smith, director of racing and public affairs at Ascot, said: “Whilst the ultimate experience of being at Royal Ascot sadly isn’t possible this year, we hope that what we are planning will make ownership at home as special as possible.

“We are particularly pleased to be able to provide owners with a feed to the Parade Ring, and to be housing all the data that all horsemen need from real time weather and going reports to post race sectionals in one, convenient place.”

The Queen is known for her love of horses, her equestrian knowledge and her breeding of racehorses, and she traditionally attends Ascot each year.

In 1955, the event was postponed because of the national rail strike and held in July instead, but the Queen still attended with her sister Princess Margaret.

In 2017, the Queen had to dash from the State Opening of Parliament to Ascot when her speech in the House of Lords fell on the second day of the meeting.

The Queen has won around £7 million in prize money from horse racing over the past three decades.

While there will be no royal carriage processions which see the monarch and accompanying royals arrive along the track in horse-drawn landaus before heading to the Royal Enclosure, the National Anthem will be played 15 minutes before the first race each day.

As part of its Royal Ascot at Home campaign, the racecourse is inviting fans across the globe to dress up and wear a hat – whether a ladies’ hat, men’s top hat, panama, trilby or other racing hat – and share a selfie on social media using the hashtags #StyledWithThanks and #RoyalAscot.

Participants are being encouraged to donate £5 to support for four frontline charities – The National Emergencies Trust Relief Fund, NHS Charities Together, The Care Workers Charity and the Berkshire Community Foundation Coronavirus Fund.

Only a jockey, groom and trainer or their representative are allowed per horse at the racecourse, and the traditionally strict dress codes have been suspended, with those allowed admission requested simply to dress smartly.