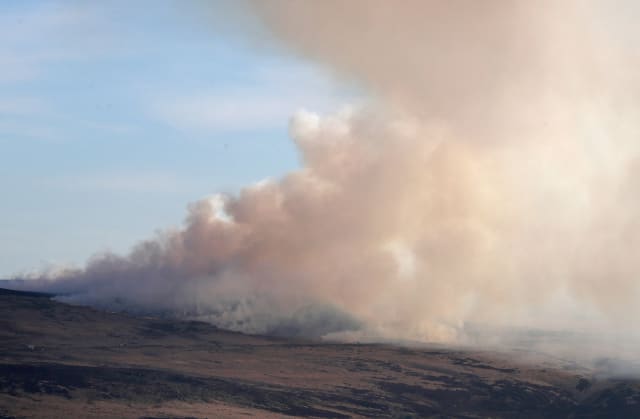 A significant rise in people bringing barbecues to the countryside as lockdown eases is increasing the risk of wildfires after a dry spring, the National Trust warned.

National Trust rangers said they have seen an increase in litter and people using disposable barbecues or making fires in the countryside as the easing of coronavirus restrictions coincides with spells of fine weather.

But despite some recent rainfall, the record-breaking sunny spring has left many landscapes dry and at risk of fires starting and spreading quickly, the conservation organisation said.

As people flock to enjoy countryside and coastal beauty spots, the National Trust is urging them not to bring a barbecue or light a campfire when they visit, and to take their litter home with them.

The trust has seen several large blazes on its land since the start of April, including one at Froward Point, Devon, on May 24 which was started by a barbecue and took six fire engines and a police helicopter to extinguish.

Other recent blazes, with unknown causes, include a large fire at Thurstaston Common, the Wirral, on May 28, burning heathland that is home to lizards and tiger beetles, and a large fire on Marsden Moor, West Yorkshire, on April 6, after which burnt curlew eggs were found.

The wildfire warning comes as people head to the countryside and coasts in large numbers to enjoy the relaxing of lockdown rules.

The late May bank holiday saw beauty spots including Formby Beach in Merseyside, Birling Gap in East Sussex and the North York Moors recording their busiest day ever for visitor numbers, the National Trust said.

At Studland Beach, which the trust said is at extreme risk of wildfire, fire crews put out 30 unattended barbecues in one night.

Many sites have also seen more litter, which the National Trust said is unsightly and a threat to wildlife, and can increase the risk of wildfires.

Ben McCarthy, head of nature conservation at the National Trust, said: “We know that people have missed the outdoors and open spaces these past few months – and we’re really pleased to be welcoming them back.

“But we’re urging people not to bring barbecues to the countryside or the coast. They can lead to real problems, particularly after such little rain in April and May.

“Many areas of land are still very dry and all it takes is a single spark from a barbecue or a dropped cigarette to cause a serious fire.”

He urged: “Please think of others; think of the wildlife; think of our emergency services; and don’t bring barbecues to the beach or countryside.”

Mr McCarthy added the issue of litter had ramped up recently, warning: “We absolutely want people to experience the beautiful natural places we look after and enjoy a picnic in the outdoors – but it’s not OK to drop rubbish and expect someone else to pick it up for you.”

People should hold on to rubbish until they find a bin, or better still, take it home with them, he said.