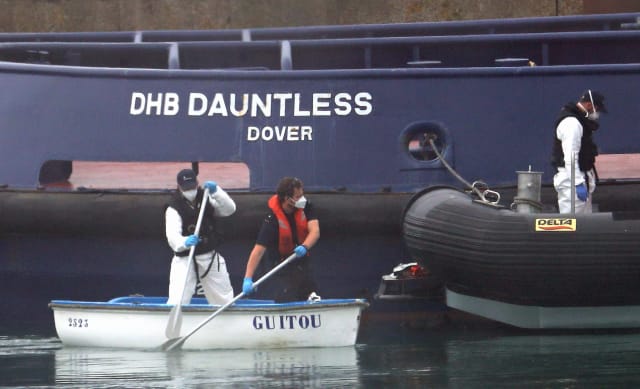 More migrants are believed to have made it to the UK on Tuesday despite thick fog shrouding the coast.

Border Force boats were busy in the English Channel as crossings appeared to continue unabated.

Suspected migrants were seen at Dover on Tuesday morning and a rowing boat filled with oars was towed into the harbour by immigration officers.

The small white and blue vessel was seen being paddled through the Kent port by officials after its arrival.

Ambulance services were also on the scene, the PA news agency understands.

Conditions in the English Channel – the busiest shipping lane in the world – can be treacherous for small boats, even when visibility is clear.

But large swathes of fog obscured views at Dover on Tuesday morning, with cruise ships shrouded.

Tuesday’s activity came after 49 migrants on board five boats were intercepted by UK authorities on Monday and taken ashore in Dover.

The Home Office has not yet confirmed how many migrants were intercepted on Tuesday.

Migrants taken to the Kent port are issued with masks and are assessed for symptoms of Covid-19, but are not routinely tested.

Meanwhile, in French waters, a boat carrying four migrants was spotted by the Spirit of Britain ferry.

They were later picked up by the French navy and taken ashore in Boulogne-sur-Mer.

At least 1,579 migrants have crossed to the UK on small boats since the coronavirus lockdown was announced, according to data gathered by PA.

This is despite the continuing coronavirus crisis and repeated warnings of the dangers of crossing the Channel in small boats.