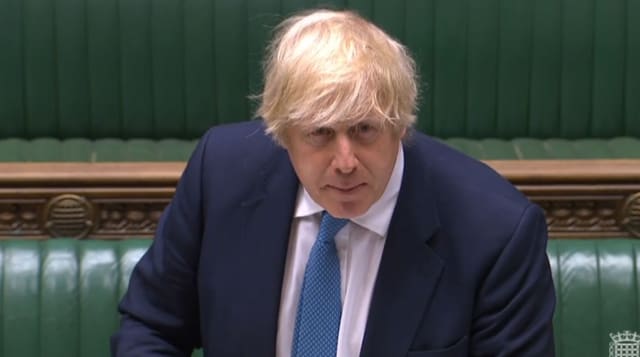 Three former prime ministers have denounced Boris Johnson's plans to scrap the Department for International Development (DfID) as part of a merger with the Foreign Office.

The move, which has also come under fire from former international development secretaries, Opposition MPs and aid charities, will see the creation of the Foreign, Commonwealth and Development Office.

But Mr Johnson, in a statement to MPs, said the separation created between diplomacy and overseas development by Mr Blair's administration was "artificial and outdated".

Speaking in the Commons, the Prime Minister argued that the "super-department" would be of "huge benefit" to Britain's overseas aid mission.

Mr Johnson told MPs: "For too long, frankly, UK overseas aid has been treated as some giant cashpoint in the sky that arrives without any reference to UK interests or to the values that the UK wishes to express or the priorities, diplomatic, political or commercial, of the Government of the UK."

Leading the reaction, Labour leader Sir Keir Starmer decried folding DfID into the Foreign Office, calling for the PM to "stop these distractions" and deal with the health and economic fallout being wrought on the country by coronavirus.

Shadow foreign secretary Lisa Nandy said the country is "diminished in the world" following the announcement, while MP Hilary Benn, who headed up DfID during Mr Blair's premiership, called it the "wrong decision".

A host of Mr Johnson's predecessors also lined up to lambast the aid shake-up.

In a statement to the PA news agency, Mr Blair said the Government had made a "wrong and regressive move".

"I am utterly dismayed by the decision to abolish DfID," said Mr Blair, who occupied Number 10 for a decade.

"We created DfID in 1997 to play a strong, important role in projecting British soft power. It has done so to general global acclaim.

"The strategic aims of alignment with diplomacy and focus on new areas of strategic interest to Britain could be accomplished without its abolition."

Mr Brown, chancellor at the time of DfID's founding, tweeted to say he was saddened to see Mr Johnson "abolishing one of the UK's great international assets".

Fellow former premier Mr Cameron also waded in, tweeting that the merger was a "mistake" and that the reforms would result in "less respect" on the global stage for the UK.

But Mr Johnson hit back at the accusation from Mr Cameron, telling MPs he "profoundly" disagreed with the comments.

Downing Street confirmed the new-look department will be formally established in early September, with Foreign Secretary Dominic Raab in charge of the operation.

International Development Secretary Anne-Marie Trevelyan will remain in post until the merger is complete.

"These changes mean the UK will be best placed to lead the international effort on Covid recovery and renewal."

The PM confirmed that the target of spending 0.7% of gross national income (GNI) on development, which was part of his winning December manifesto and is enshrined in law, will remain in place.

Aid charities expressed their dissatisfaction at the merger in droves.

He said: "This decision puts politics above the needs of the poorest people and will mean more people around the world will die unnecessarily from hunger and disease."

Kevin Watkins, chief executive of Save the Children, described it as "flawed".

"During the biggest humanitarian crisis in a century, when the Covid-19 pandemic is reversing hard-won gains in child and maternal health, education, and poverty, this is a baffling and deeply damaging move," he said.

Other organisations in the sector, including World Vision UK, The One Campaign and Global Justice Now, echoed the condemnation of the Whitehall change, while former Tory international development secretaries Rory Stewart and Andrew Mitchell have also spoken out about the decision.

I welcome the combining of the FCO with DFID. It will promote 🇬🇧 as a world leader in decarbonisation, helping the poorest to protect their lives.

Brilliant UK green science & tech will help us level up and create new green jobs across our country. pic.twitter.com/VQnsERyd6j

The Government was given the backing of a host of senior Tories, however.

Mr Hunt called it the "right thing to do" and said Britain needs to "speak with one voice" on issues of diplomacy and development.

Government sources indicated that there would be no compulsory redundancies as a result of the overhaul.