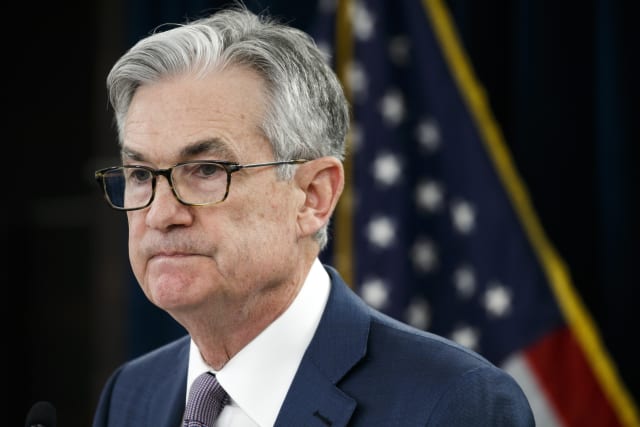 Global markets were dominated by news out of the US on Tuesday as the Federal Reserve found another kitchen sink to throw at the coronavirus crisis.

The Fed’s decision, announced on Monday, to add individual corporate bonds to its stimulus package lit a flame under investors all day on Tuesday.

It paired up with murmurs out of Washington that the administration is considering spending one trillion dollars (£790 billion) on a major infrastructure push.

The move would see billions invested in roads and railways, and digital infrastructure, in a bid to help kickstart the US economy.

It meant the index bounced back in style, shrugging off worries of a second wave in China that had made it droop on Monday.

“The bullish sentiment is largely being fuelled by the belief the Trump administration is looking to set aside an extra one trillion dollars for infrastructure spending,” said CMC Markets analyst David Madden.

“The scheme would see funds being poured into roads, rail and 5G. The chatter of the stimulus package comes less than one day after the Fed announced they will start purchasing individual corporate bonds, so today the bulls are firmly in control.

“The number of new Covid-19 cases as a result of economies being reopened is still an issue, but for now it has taken a back seat to the talk of Trump’s infrastructure plans.”

On the other side of the point, both the Dow Jones and the S&P 500 were trading up around 1.7% shortly after Europe’s traders logged off for the day.

The cost of international oil standard Brent crude pushed up by 1%, to 40.17 dollars per barrel.

In company news, Ashtead led the pack of the FTSE 100’s top performers after it bucked the trend for companies to slash dividends, actually hiking its full-year payout to investors somewhat. Shares rose 9.6%.

It was followed by Ferguson, up 8.1% after it raised 600 million US dollars (£477 million) from a bond sale in order to pay off its debt.

The news that fast-food outlet Greggs is to reopen around 800 stores from Thursday and another 1,000 in July, sent shares climbing by 5.2%.

Unsurprisingly, shares in De La Rue were up by 5% on the news that the Serious Fraud Office had dropped an investigation into the banknote maker. The SFO had been probing allegations of fraud, bribery and corruption in South Sudan, where De La Rue has worked since 2011.

And finally, German air operator Tui reported a rise in bookings as it restarts services in several European countries. The business’s warnings not to expect a quick recovery were not enough to over-rule investors’ optimism. Shares rose 3.1%.