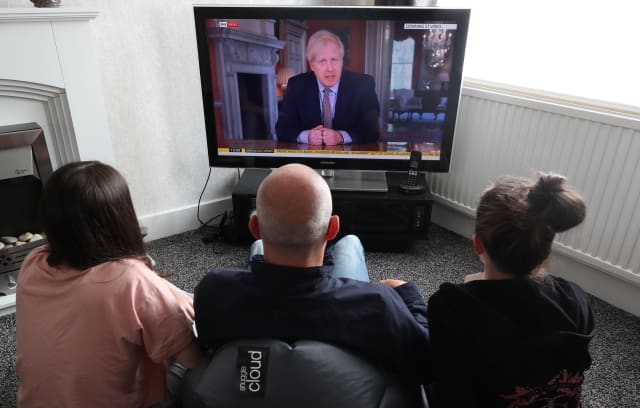 There has been a resurgence in the number of people turning to the TV for their daily news during the coronavirus pandemic, new data suggests.

In January, 55% of people in the UK had used the television as a source of news within the past week, but this jumped to 71% by April, according to the Reuters Institute for the Study of Journalism Digital News Report 2020.

The research shows that small-screen usage was highest among older generations, with 81% of over-55s watching TV news in April, compared to just 57% of under-35s.

However, the younger generation showed the largest rise in interest, with a 25 percentage point increase from 32% of under-35s using the TV for news three months earlier.

There has been a steady decline in the number of people using TV as a source of news in the last seven years, and despite coronavirus, numbers are still down on the 79% of Britons regularly viewing TV news in 2013.

There was also an uptick in the number of people getting their news from social media, while newer platforms such as Instagram and TikTok have also been used by some 18-24s for accessing news on Covid-19, the research suggests.

Nic Newman, senior research associate at the Reuters Institute for the Study of Journalism said: “The coronavirus crisis has substantially increased news consumption for mainstream media in all six countries where we conducted surveys before and after the pandemic had taken effect.

“Television news and online sources have seen significant upticks, and more people identify television as their main source of news.”

The figures form part of the Reuters survey which asked 80,155 adults across 40 countries for its January data set, with around 2,000 taking part in each country.

After the Covid-19 pandemic hit, pollsters asked the same questions of people again in April, but this time only in six countries, including the UK.