Restaurateur ‘over the moon’ at reopening date for eateries 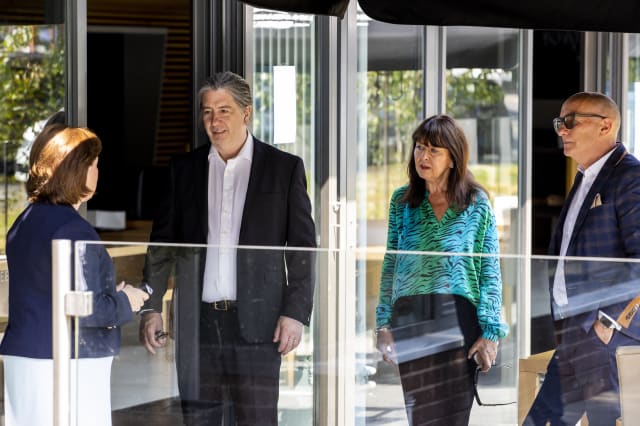 A Belfast restaurateur has said he is “over the moon” at the announced date for the reopening of eateries in Northern Ireland.

Economy minister Diane Dodds announced on Monday indicative dates of June 26 for self-catering accommodation to reopen and July 3 for restaurants.

She made the announcement at the Deanes at Queen’s restaurant in south Belfast.

Owner Michael Deane said he was delighted to have a date to plan for, telling the PA news agency he was hoping to start taking bookings on Monday evening.

“I’m really over the moon about it, we need to get back at it,” he said.

“We have been closed for too long but of course people’s safety and their health is paramount.

“I think July 3 is a good date because a lot of people will still be on holiday, people may start to travel a bit and hopefully we’ll get people up from the south. It’s a good way to test the water.

“We know it’s not going to be easy. There are a lot of mountains to climb and we’re just going to have to try our very best to be back for the people of Belfast.

“We have got four addresses with seven different food offerings, I hope they’ll all survive. I don’t know how many people are going to be in the city.

“We know we are going to suffer, we have to be real about it and hopefully the people of Belfast and beyond will support us.

“I think it has brought us (the sector) to our knees, it’s a bit like starting over again but we are prepared to start over.”

Hospitality Ulster chief executive Colin Neill described the move as a “significant milestone in what will be a long and challenging path to rebuild”.

He said he was hopeful it may save jobs in the sector.

“Pre Covid-19, 65,000 people depended on us to put bread on their tables and a roof over their heads. We must now strive to save as many of those jobs as possible,” he said.

“Operating under the restrictions will not be easy and we recognise that many businesses will still be unable to reopen. But we welcome the minister’s comments to bring forward proposals on reopening these parts of the industry in due course.

“We will continue to work with the minister and the NI Executive to bring forward the full reopening of all our hospitality businesses as soon as possible.”

Mr Neill also spoke of his hopes of a reduction of the two-metre social distancing rules to one metre.

“In relation to the current two-metre social distancing requirements, it is highly likely that many hospitality businesses will still be unable to reopen, as it simply will not be commercially viable,” he said.

“This is not about safe and unsafe, it is about safe and safer and we are encouraged by the discussion at NI Executive level led by Minister Dodds. I hope to see the distance reduced to one metre in line with WHO (World Health Organisation) guidelines as soon as possible.”