Queues as stores reopen for first time since March lockdown 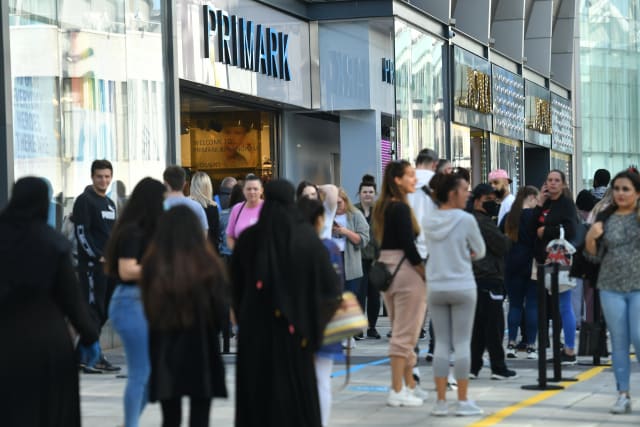 Queues have formed at stores across England as thousands of non-essential shops pulled up their shutters for the first time since March.

Customers are being encouraged to go out and spend but to “be sensible” in their approach, as the Government seeks to begin reopening the economy “gradually and carefully”.

Long lines were seen at Primark stores across the country, with dozens of keen shoppers waiting outside branches of the budget clothes store in Birmingham, Derby, Liverpool and Nottingham.

Small business minister Paul Scully insisted it is safe to shop, noting the new looks many stores will have as they attempt to ensure social distancing and good hygiene among staff and customers.

He told BBC Breakfast: “The high street is going to be a different place to what it was before, with the one-way systems, with the hand sanitisers, and with people not trying clothes on in the same way.

“But, nonetheless, it is safe to shop. I would encourage people to be sensible, work with the people in the shop but do go out and shop, and start opening our economy gradually and carefully.”

Zoos and safari parks are also welcoming back visitors on Monday, places of worship can open for private prayer while some secondary school pupils will begin returning to their classrooms.

Boris Johnson said he did not know whether to expect “a flood or a trickle” when the shops reopened but that he hoped people would return in “sensible” numbers.

Visiting Westfield shopping centre in east London on Sunday, the Prime Minister acknowledged some people may be nervous about returning to the high street after so long away but insisted they “should shop and shop with confidence”.

“There is going to be hardship ahead. People are going to lose their jobs,” he said.

Ministers are under intense pressure from Conservative MPs to go further by easing the two-metre social distancing rule so the hard-pressed hospitality sector can also reopen.

Mr Johnson confirmed at the weekend that he had ordered a “comprehensive” Downing Street review of the regulation.

The Prime Minister said the falling numbers of Covid-19 cases meant there was a greater “margin for manoeuvre” as the chances of coming into contact with someone with the disease diminished.

Mr Sunak said it would be an “all round” survey of the issue drawing on advice from economists as well as the scientific and medical experts who have been advising ministers on the pandemic.

He said it would be ministers, not scientists, who would make the decisions on any easing, fuelling the belief at Westminster that the relationship between ministers and the advisers is becoming increasingly strained.

The review is reported to be scheduled to be completed by July 4, the date slated by the Government for the hospitality sector to start welcoming back customers.

Mr Scully said it will take a “matter of weeks” for the review, which will take into account international comparisons, but added that the Government did not want to be “rushed into decisions as we gradually open up the economy”.

Many pubs and restaurants have warned that it will simply not be viable for them to reopen unless the social distancing rule is cut to no more than one metre.

The chief executive of trade union UKHospitality welcomed the review, saying the current two-metre restriction could put one million jobs at risk in the sector.

Katie Nicholls warned the rule means many smaller businesses are unable to meet the criteria for safe opening and one third of hospitality businesses may not survive the pandemic.

Speaking to BBC Breakfast on Monday, she said: “We very much welcome the Government’s decision to conduct a review on this because it is a matter of survival or business failure as far as hospitality is concerned.”

The review announcement comes as the World Health Organisation (WHO) has urged the Government not to lift the lockdown until it is proven its widely criticised coronavirus contact tracing system works.

After it was revealed the Government failed to trace the contacts of a third of those testing positive in the first week of the new system, Dr Hans Kluge, the WHO’s director for Europe, warned Britain was still in the midst of a “very active phase of the pandemic”.

Dr Kluge told The Guardian that while the tracking in England of some 31,000 contacts of 8,000 infected people was “encouraging”, the Government needed to be sure it could “aggressively” track infections if it is to reopen the country’s economy.

Labour has joined Tory MPs in urging ministers to set out a clear plan for the hospitality sector to return, with shadow business minister Lucy Powell calling on the Government to provide guidance on how it can restart.

Monday will also see secondary schools in England reopening to some pupils, with Year 10 and Year 12 students returning to get some time with their teachers ahead of their GCSE and A-level examinations next year.

The Government has faced criticism that it has not done more to get schools reopened, with some children facing the prospect of having been out of the classroom for almost six months by the time they return in September.