Private prayer in reopened places of worship is ‘moment of grace’ 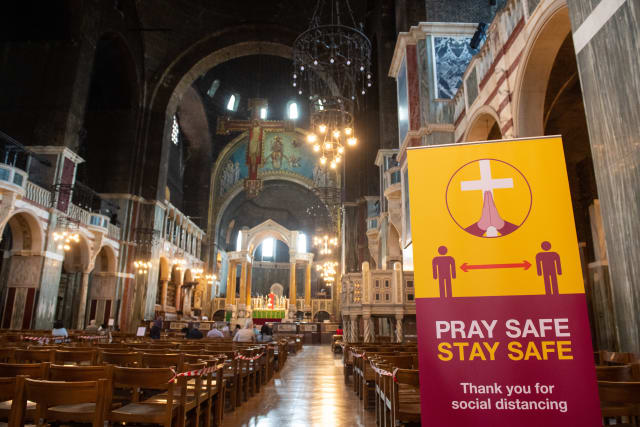 Church buildings have reopened for private individual prayer, but there were strict rules for the worshippers who took part.

Justin Welby, the Archbishop of Canterbury, and Cardinal Vincent Nichols, the Cardinal Archbishop of Westminster, started the day together in prayer.

They spent some time in private prayer before the Blessed Sacrament at Westminster Cathedral before heading to Westminster Abbey to pray at the shrine of Edward the Confessor.

The Archbishop of Canterbury tweeted that it is “always a joy to see” Cardinal Nichols “but today we needed to keep distant”.

He added: “We continue to give thanks for all battling the pandemic and pray for a renewal of our common life.”

Cardinal Nichols described it as “a great joy” to see churches open once again and it said had been “good to pray” with the archbishop “to mark this moment of grace”.

Worshippers were asked to stay for up to an hour per day to allow others the chance to enter.

The restricted hours were to allow the cathedral to be regularly cleaned and for a safe commute for the staff and volunteers.

People in groups were asked to separate or leave, and confessions were not heard at the cathedral. Toilets, the shop and cafe were shut.

The need to maintain social distancing means “this is very much the first step of our opening”, according to Fr Andrew Gallagher, of Westminster Cathedral.

He added: “I am sure we all see this as a moment of joy, after what has been a difficult journey through Lent and Easter.”

The Bishop of Chichester, Dr Martin Warner, said “it is important to stress that there is no pressure, no rush” for churches to reopen until they feel it is safe to do so.

Safety signs and marked-off seating were among the measures imposed across the Anglican churches in the Chichester Diocese.

Social media was used by St Luke’s Parish Church in the Chichester Diocese  to alert parishioners to their expected behaviour, which included use of hand sanitiser, keeping to the two-metre rule and not to enter if they had any Covid-19 symptoms.

Chichester Cathedral, which reopened to the public for the first time since March, said in a message posted on its website: “Whilst there is no public worship, votive stands will be available for you to light a candle. The Blessed Sacrament is reserved in Saint Clement’s Chapel off the South Aisle, which is set aside for private prayer.”

Rabbi Barry Lerer, based at the Central Synagogue London, had previously said it was not reopening on Monday due to the nature of synagogue prayer requiring the participation of the community.

Rabbi Lerer said people can pray at home for now and he is hopeful there will be movement on reopening in July.

They can also tap into daily services which are being held online, he added.

Current Government guidance says singing and playing instruments, with the exception of the church organ, should be avoided, as officials continue to review scientific and medical advice around how those activities can be managed safely.

There is said to be a lack of clarity for mosque leaders on how to implement regulations for their congregations.

Harun Khan, secretary general of the Muslim Council of Britain (MCB), said earlier this month: “Mosques are provisioned primarily for congregational worship, so there is currently significant uncertainty and concern from mosque leaders on how the new regulations can actually be implemented.”