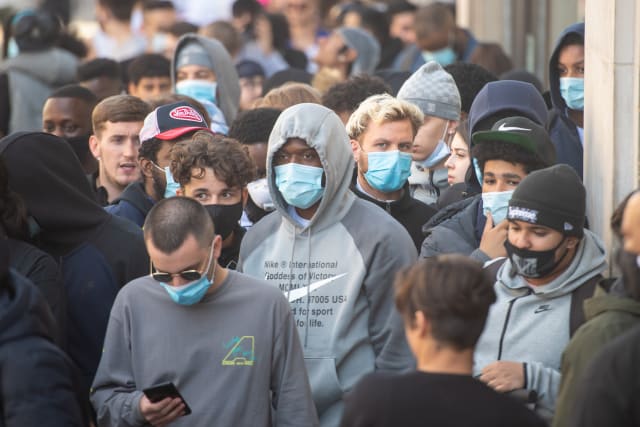 The Government is facing further pressure to cut lockdown restrictions as ministers brace for the latest figures on coronavirus-related job losses.

The latest unemployment data will be published by the Office for National Statistics (ONS) on Tuesday, only hours before the Prime Minister meets with his Cabinet.

With the ONS figures expected to make for grim reading given the economic fallout from Covid-19, Tory grandees have called on Boris Johnson to ease the extent of the restrictions currently in place.

Data published last week revealed that the UK’s economy shrank by 20.4% in April – the largest monthly contraction on record – as the country spent its first full month in lockdown.

Writing in the Daily Telegraph, former Conservative Party leader William Hague said the latest batch of figures were likely to “represent a personal catastrophe for hundreds of thousands of people” and that the lockdown was a “disaster (that) cannot under any circumstances be repeated”.

The Prime Minister has promised a review into the two-metre distancing rule but Downing Street said it could not guarantee the results would be published before July 4, when the hospitality industry is due to reopen.

But Lord Hague urged ministers to step in and save the hospitality industry from “weeks (of) agonising” over a decision on cutting the two-metre enforcement – the gap people in the UK are advised to stay away from each other to prevent the spread of the virus – and cut it immediately.

The former foreign secretary said it was “not necessary to have a two-metre separation between people to keep the virus in retreat where it is already at a low level” and cited the experience of the likes of Denmark, France and Germany where the “recommended distance is shorter” than in the UK.

The British Beer & Pub Association (BBPA), a trade body representing brewers and pubs, has demanded Number 10 give a clear date for when pubs can open their doors, including what social distancing guidance businesses can expect to have to follow.

Scores of MPs, including former Cabinet ministers, used a debate in the House of Commons to urge the Government to announce its review decision before July 4.

Ex-business secretary Greg Clark asked why having a restriction shorter than two metres in other countries was “right for them but wrong for us”, while Commons defence committee chair Tobias Ellwood said it was “now time for the Government to decide”, not in two weeks.

– Around one in five pupils are said to have carried out no schoolwork at home, or less than an hour a day, since schools closed partially in March, according to research by UCL Institute of Education (IOE), while a report by the National Foundation for Educational Research suggested that fewer than half of pupils returned their last piece of set work to teachers.

– Scientists at Imperial College London will begin testing another possible coronavirus vaccine on humans this week.

– Foreign Secretary Dominic Raab said the Government’s medical and scientific advisers will continue to take part in its televised coronavirus briefings but “perhaps not on a daily basis” after a drop-off in public appearances from the experts in recent weeks.

– US-UK trade negotiators are due to commence the second round of talks as ministers look to prepare the way for a post-coronavirus economic boost.

Meanwhile, customers turned out in force on Monday as England’s retail parks, high streets and shopping centres reopened after a three-month shutdown, with footfall rising by more than a third on last week.

Long lines were seen at Primark stores across the country, with dozens of keen shoppers waiting outside branches in Birmingham, Derby, Liverpool and Nottingham due to restrictions on how many people could enter the shops at one time to respect social distancing.

A petition has garnered 3,500 signatures after calling for popular shopping destination Bicester Village to be shut down until numbers can be better controlled after social media depicted hectic scenes in the Oxfordshire town.

Petition founder Laura Wicks said she was “disgusted to see the hundreds of people squashed into the street like coronavirus never happened”.

But while there was a week-on-week increase in retail footfall, data released by retail analyst Springboard indicated that, despite the busy scenes, footfall across all of England’s high streets on Monday was still down 45.3% compared to last year when no restrictions were in place.