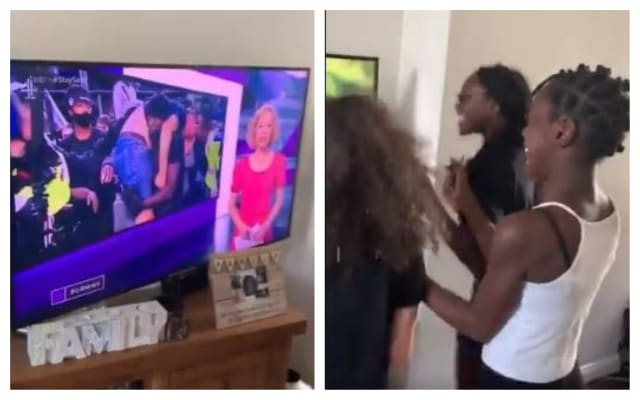 The daughter of a Black Lives Matter protester who rescued an injured white man celebrated excitedly as her father appeared on TV hailed for his heroics.

Patrick Hutchinson, a personal trainer and grandfather, made global headlines after saving the man from harm during violent protests in central London on Saturday.

His daughter Sidena, 10, was filmed celebrating excitedly with friends Kai’Yonna and Chela when an interview with her now-famous father was broadcast on Channel 4 News.

The clip went viral and Ms Danso, from Croydon in south London, said her phone had barely stopped vibrating with messages.

She added that Sidena was shocked at her father’s newfound celebrity status but was incredibly proud of him.

Mr Hutchinson formed a group with four of his friends, who are part of London-based close protection group Ark Security, to protect young Black Lives Matter protesters from getting caught up in the violence at the protests.

They took it upon themselves to be the “overseers” at the protest, to make sure those who needed help were taken safely to emergency service workers.

The group spotted a lone white man being dragged by young black protesters through a crowd and thrown on the steps near the Royal Festival Hall.

“His life was under threat so I just went and scooped him up, put him over my shoulder, and started marching towards the police with him,” Mr Hutchinson told Channel 4 News.