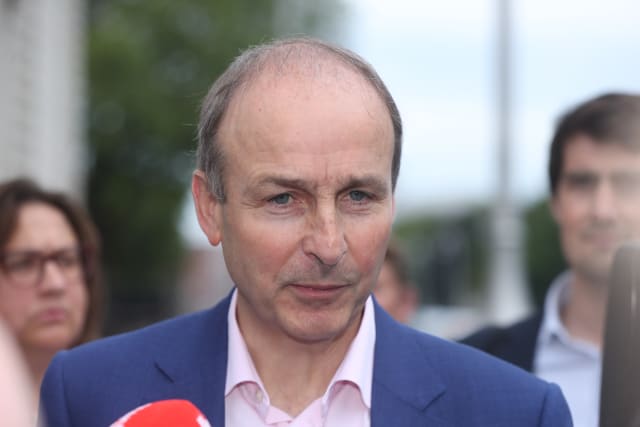 Fianna Fail leader Micheal Martin is set to become Ireland’s next premier as part of a proposed deal to form a new coalition government.

The position of Taoiseach will be rotated under the terms of the historic draft programme for government being finalised by Mr Martin, current Irish premier and Fine Gael leader Leo Varadkar and Green Party leader Eamon Ryan.

The three leaders are on the verge of agreeing a deal to form a coalition government more than four months on from February’s inconclusive general election.

The draft deal will still have to be endorsed by the parliamentary teams of the three parties, before being put to their respective memberships for approval.

Mr Varadkar confirmed on Monday morning that the position of Taoiseach would be rotated and he indicated Mr Martin would be the first incumbent.

The Fine Gael leader said he did not know what post he would assume in the new Cabinet.

Sinn Fein won the popular vote but its efforts to form a left-wing coalition government foundered, as it was unable to secure the requisite 80 seats to secure a majority in the Dail parliament.

Fianna Fail and Fine Gael – parties that have been historic foes since their formation from opposing sides of Ireland’s Civil War of the 1920s – are now set to enter government together for the first time.

The Greens have been persuaded to be the third party in the coalition – thus securing a working majority – after negotiating a number of environmental concessions in the draft programme for government.

“This is an agreement that, from my point of view and certainly from the point of view of the country, is going to be a good one and one that is very much in line with Fine Gael’s values and principles,” Mr Varadkar said as he attended an event in Dublin on Monday morning.

The draft programme for government will see a plan to increase the state pension age to 67 deferred pending the outcome of a commission to examine the issue.

There will also be no increase in income tax or the Universal Social Charge in the next Budget.

The Greens have demanded a commitment to cut carbon emissions by 7% annually over the five years of the government and also a ban on the importation of gas extracted by fracking.

Mr Varadkar, who has continued as Taoiseach since the election, added: “It’s a good package overall. Now we need to make it happen.”

Arriving at Government Buildings in Dublin to finalise the text, Mr Martin said: “The major issues have been resolved and obviously we’ll present the programme for government to our parliamentary parties, that’s important, and then out to the membership for ballot.

“But I think the programme as it’s now formulated does represent a significant new departure in terms of public policy, particularly in relation to housing, health, education and climate change itself, because I think it is important.”